Debate about whether the East or the West side of Singapore is a better place to live usually centres around food, amenities or accessibility. While these things are certainly important in deciding where to live and set up home, it’s perhaps more accurate, and possibly more interesting to look at data and statistics. In the second part of our East vs West series (read the first here), we compare the property value between condos on the East Coast and West Coast region in Singapore, to determine if one is worth more than the other — based on past transactions. Read on to find out if you or your friends live on the more expensive side of Singapore, according to data from Singapore’s largest property portal 99.co.

What’s the East and West Coast of Singapore in property terms?

For our comparison, we defined East Coast as the area south of Mountbatten Road, East Coast Road and Upper East Coast Road. The Tanjong Rhu neighbourhood is also included. The East Coast area is bounded on the West by Marina Bay and on the East by Laguna Golf Course & Country Club.

We defined West Coast as the area south of Ayer Rajah Expressway. It is bounded on the West by Pandan River and on the East by West Coast Highway (from Sentosa Gateway onwards).

How we compared East Coast vs. West Coast condos in Singapore

For each group of freehold/leasehold properties, we also decided to compare per square foot (psf) transaction values according to floor level: low floor (up to 5 storeys), mid floor (6 to 11 storeys) and high floor (12 storeys and higher); this is because there’s a higher proportion of low-rise condos in the West Coast area we specified, compared to the East Coast of Singapore. We also wanted to find out if low/med/high floor West Coast properties cost more than their respective East Coast condos.

For freehold condos, East Coast properties appear to have the price advantage 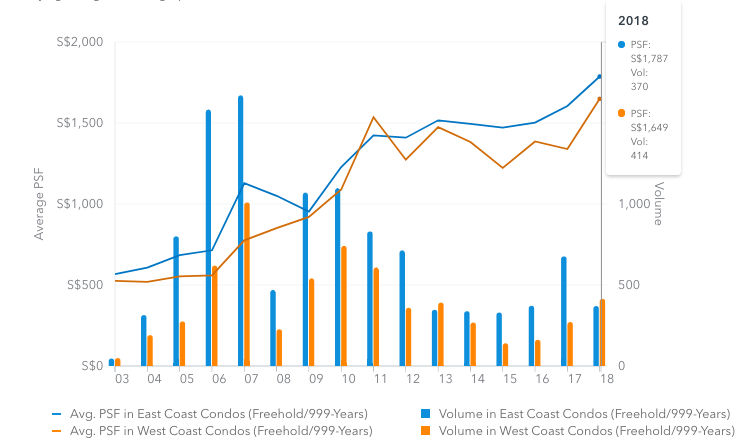 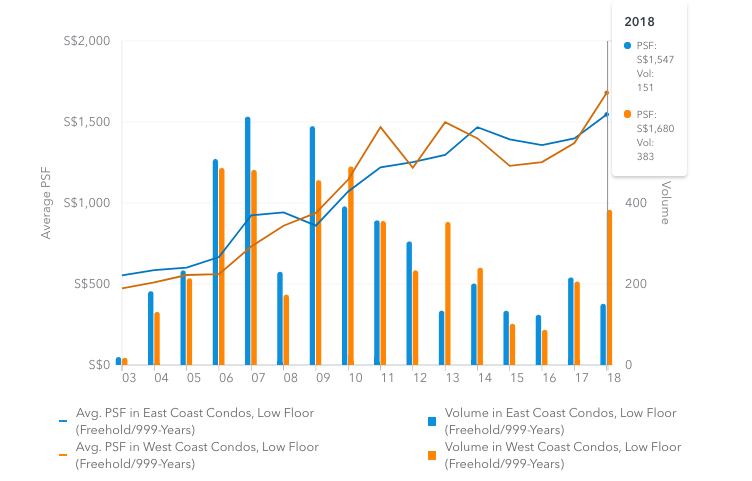 When we limited the comparison to units up to the 5th storey, we found that there was a big drop in the average psf transaction prices for freehold condos in East Coast. In 2018 to date, the average psf transaction price is $1,547, which is 13.4% lower than the overall average psf price. Interestingly, low-floor freehold condo units in the West Coast have transacted at a higher psf price than their overall average ($1,680 for low floors vs. $1,649 overall). The poorer price performance for low floor freehold East Coast units can be attributed to the following:

In contrast, low floor developments are the norm in much of the West Coast area (in particular Pasir Panjang) and there is no vast disparity between lower and higher floor units, especially given that West Coast condos are situated further away from the shore (and separated by a container port) compared to East Coast condos, which are only separated from the shore by ECP and East Coast Park. It is worth noting that many low floor condos in the hilly West Coast area are also situated on higher ground, which actually allows a handful of south-facing units to get unblocked views (some even have pretty decent sea views despite being further inland).

Once we consider mid-floor and high floor units, the East Coast’s price advantage is swiftly restored 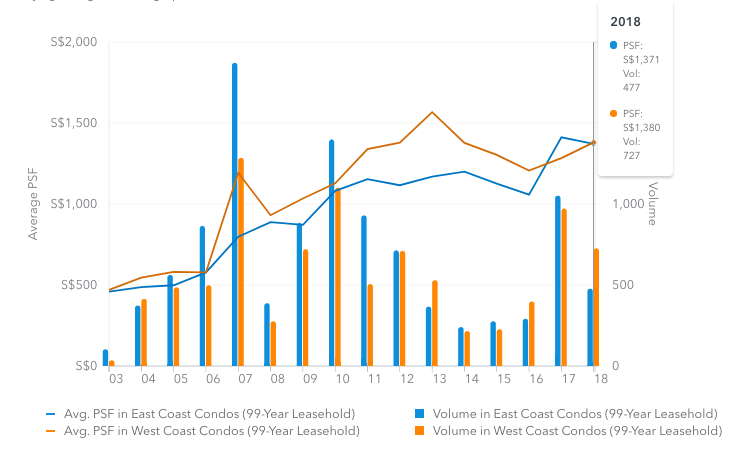 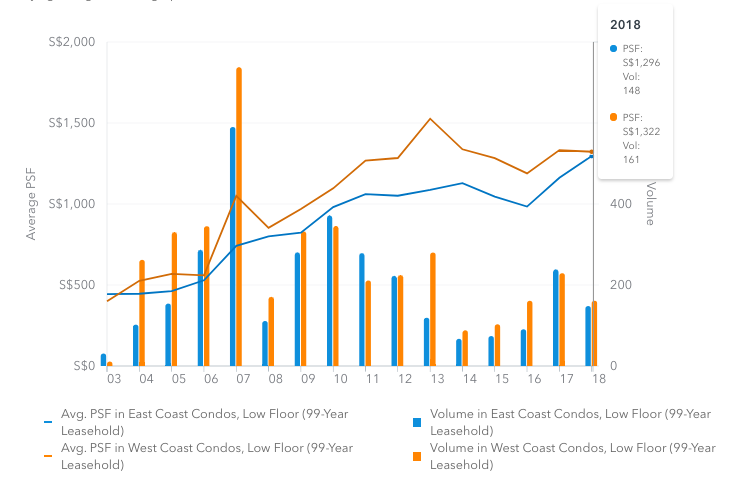 In 2018 to date, the average psf transaction price of low-floor, 99-year leasehold West Coast condos is 4.2% below average. For East Coast condos, that difference is larger, at 5.4%. Although low floor West Coast 99-year leasehold condos have had a sustained average psf price advantage over similar East Coast units, things might change as the completion date for the Thomson-East Coast MRT Line draws nearer. The same could be said for mid-floor units: 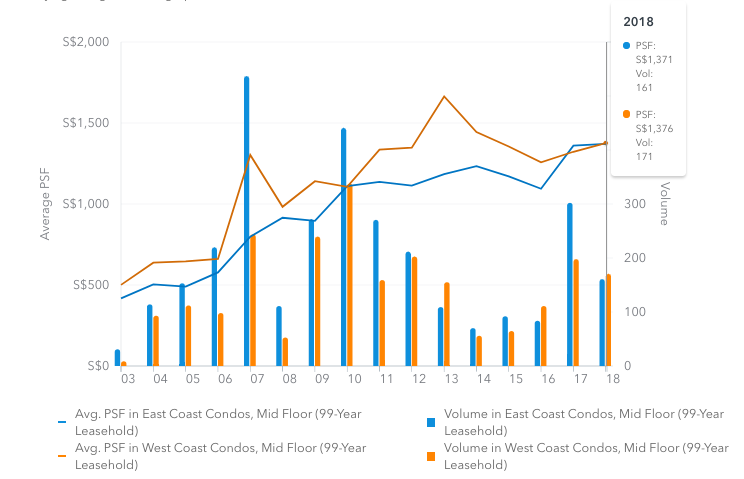 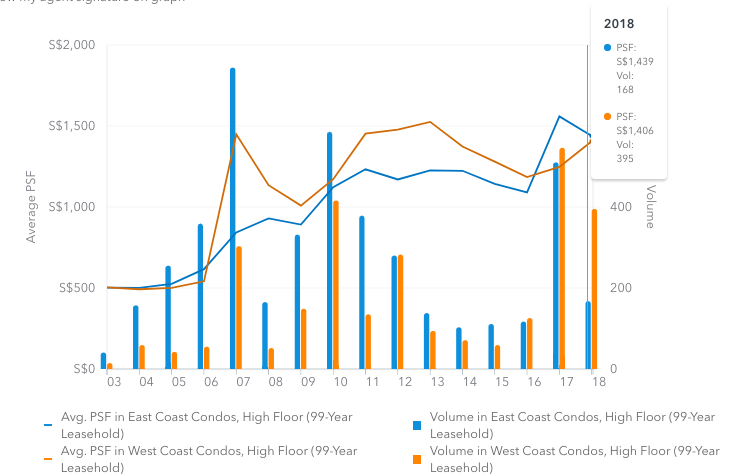 When looking at high floor, 99-year leasehold condos, it became apparent that transaction data from West Coast condos showed huge fluctuations in average psf price. So we looked more closely at our data and found that the spike in 2007 was down to the launch of the landmark project Reflections at Keppel Bay, a waterfront project that sold at a relatively high psf price on launch. The subsequent peak, which occured before the implementation of significant cooling measures in 2013, was attributed to sales of The Interlace and Seahill. That these projects were launched at the heights of the market were a merry coincidence for the developers (not so much for buyers).

In fact, without the three mentioned projects, the East would again reassert its dominance, as the chart below shows: 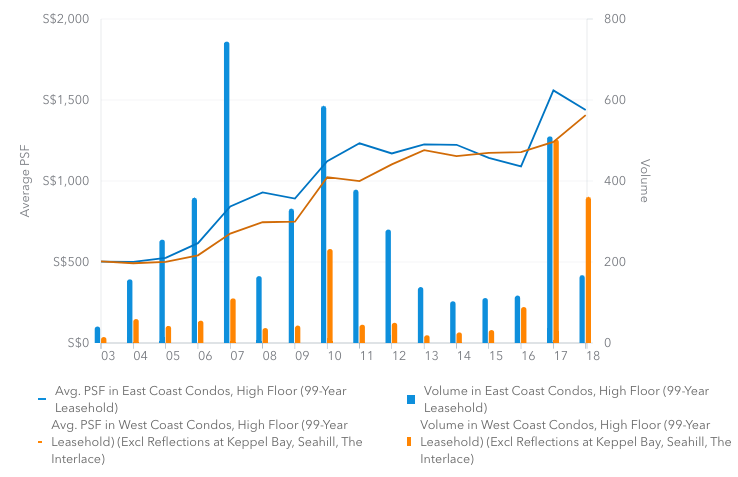 What we also notice is that, without the three mentioned projects, the volume of high floor transactions for leasehold West Coast condos is quite significantly lower. Up till the recent launch of Twin VEW and Parc Riviera, there just hasn’t been many high rise leasehold condominium projects in the West Coast. Hence, it can be reasoned that high floor units in the West Coast are always going to be sought after due to scarcity, justifying the psf price premium for these units. Other completed high rise, 99-year leasehold condos in the West Coast include The Vision (TOP: 2013), Blue Horizon (TOP: 2005) and Harbour View Towers (TOP: 1994).

So, which is better, East Coast or West Coast condos?

Although East Coast’s freehold condos seem to command a price premium over units in the West Coast, it might not apply to lower floor units. For 99-year leasehold condos, the West Coast currently has more star players that command a higher price premium over the East Coast. Bear in mind that there might be more factors at play with regard to property value between two geographical areas. In our comparison, for instance, we haven’t taken into price differences due to the age of the condos nor the remaining lease among 99-year leasehold properties.

Ultimately, data on property transactions, which indicate property value in the respective parts of Singapore, are useful — but only part of the picture. Live in an area long enough (and set up a family there) and you’ll come to vouch for all its perfections and imperfections. Having said that, we feel that accessibility remains one of the biggest reasons for choosing which side of Singapore to live in, namely proximity to parents and your workplace. For that, you can count on 99.co’s ‘Search by Travel Time’ feature to find a property with the ideal location. 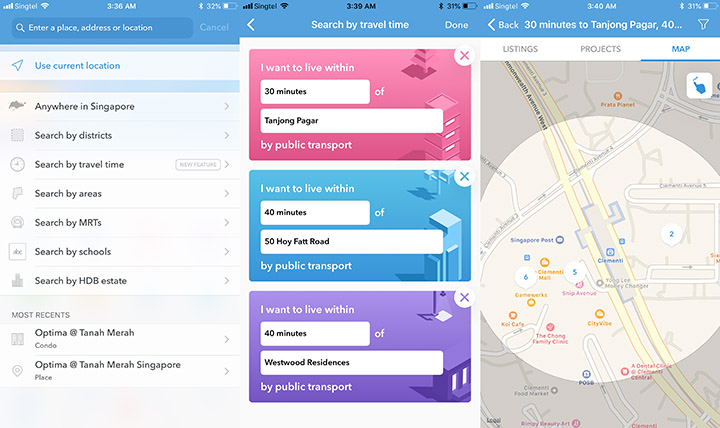 If you liked this article, 99.co recommends Should you buy a 99-year leasehold over a freehold condo? and East Region of Singapore: the best neighbourhoods for you