Occupying a location that has attracted Singapore’s most discerning individuals for more than a century, Meyer Mansion boasts all the benefits and comforts of the modern world — and yet, charmingly harks back to a more elegant time.

This freehold condominium’s classical inspirations and villa-influenced ambience offer residents the enviable opportunity to experience a sense of historic, landed grandeur while also enjoying the qualities of cutting-edge contemporary development.

In the early days of Singapore, numerous wealthy businesspeople and figures from the colonial administration built mansions and villas along the East Coast’s Meyer Road. This street was named in honour of the tycoon Manasseh Meyer, whose firm Meyer Brothers controlled almost all trade with India in the late 1800s and early 1900s.

One of the richest men in Singapore, at the peak of his success, Meyer was said to have owned roughly three quarters of private property on the island. A visionary developer, he built this country’s first blocks of apartments, along with structures including the Adelphi Hotel on Coleman Street and Katong’s Seaview Hotel.

Famed for his philanthropic generosity, Meyer funded the establishment of Singapore’s two synagogues and was a major contributor to the founding of Raffles College, now the National University of Singapore. For these and his many other charitable endeavours, Meyer was knighted in 1929.

Seeking respite from the crowds and stress of the city, Meyer and other prosperous Singaporeans of a century or so ago frequently used their elegant seaside residences as not merely dwellings but private resorts.

Most of these grand homes included large verandahs, which served both a recreational purpose — allowing for outdoor socialising and entertaining — as well as a practical one, helping aid the circulation of sea breezes and cooling the interior in those days before air conditioning.

Harking back to the historic seaside villas that once occupied its sought-after address on Meyer Road, Meyer Mansion aims to offer residents the atmosphere of a gracious classic bungalow — simultaneously featuring all the modern amenities, security and conveniences provided by 21st-century condominium living.

Inspired by the lifestyle enjoyed by the privileged bungalow dwellers of a century ago, Meyer Mansion’s design takes its cues from the muted hues and angular lines of refined black-and-white homes, while its expansive balconies are reminiscent of the villas’ verandahs… A space to relax, take in the vista and cool down in the mellow ocean breeze.

The flexible design of Meyer Mansions apartments’ living areas allow for generous entertaining spaces to be created, and for layouts to be adapted to the needs of residents in various stages of life, with evolving requirements. This is particularly important as we adjust to the changing needs of the family, and the shifting home/office balance that has begun to take place.

Perched overlooking the sea on one side and an expanse of landed properties on the other, Meyer Mansion provides enviable unblocked views.

With just 200 units across its 25 storeys, Meyer Mansion has been designed on an intentionally intimate scale, forming a small ‘vertical neighbourhood’ redolent of the convivial communities of well-to-do individuals that lived in this enclave many decades ago.

Some 80 per cent of the property Meyer Mansion occupies is devoted to landscaping and amenities, bringing a sense of the grand gardens one would’ve possessed as the owner of a coastal bungalow during the early 1900s. Remarkably for a development of this scale, Meyer Mansion also features two pools and two function rooms — a generous provision for a 200-unit condominium.

Of course, a key factor that lured the original residents of Meyer Road to build houses hereabouts was the proximity of the seaside. That remains a distinct draw at Meyer Mansion, which offers quick and direct underground access via a tunnel to one of the most serene, uncrowded areas of East Coast Park. Residents are just moments away from cycling, jogging or walking paths, seaside picnic facilities and the myriad other recreational opportunities the park presents.

In the area surrounding Meyer Mansion, you’ll find countless fantastic food and beverage options — dining is something the Katong neighbourhood has long been famous for. Parents will be pleased with the selection of educational options nearby, ranging from respected local and international schools to enrichment programmes.

The development is also situated within remarkably easy reach of Changi Airport and the CBD, both of which are as little as ten minutes’ drive from Meyer Mansion. And with the impending opening of the Katong Park MRT station, residents will be just five stops away from Marina Bay on the Thomson-East Coast Line, making the commute into Singapore’s business and financial district hardly long enough to absorb the morning’s news updates or sufficiently scroll through Instagram. 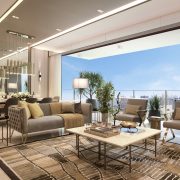 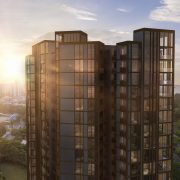 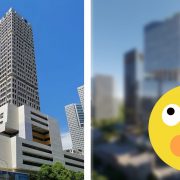