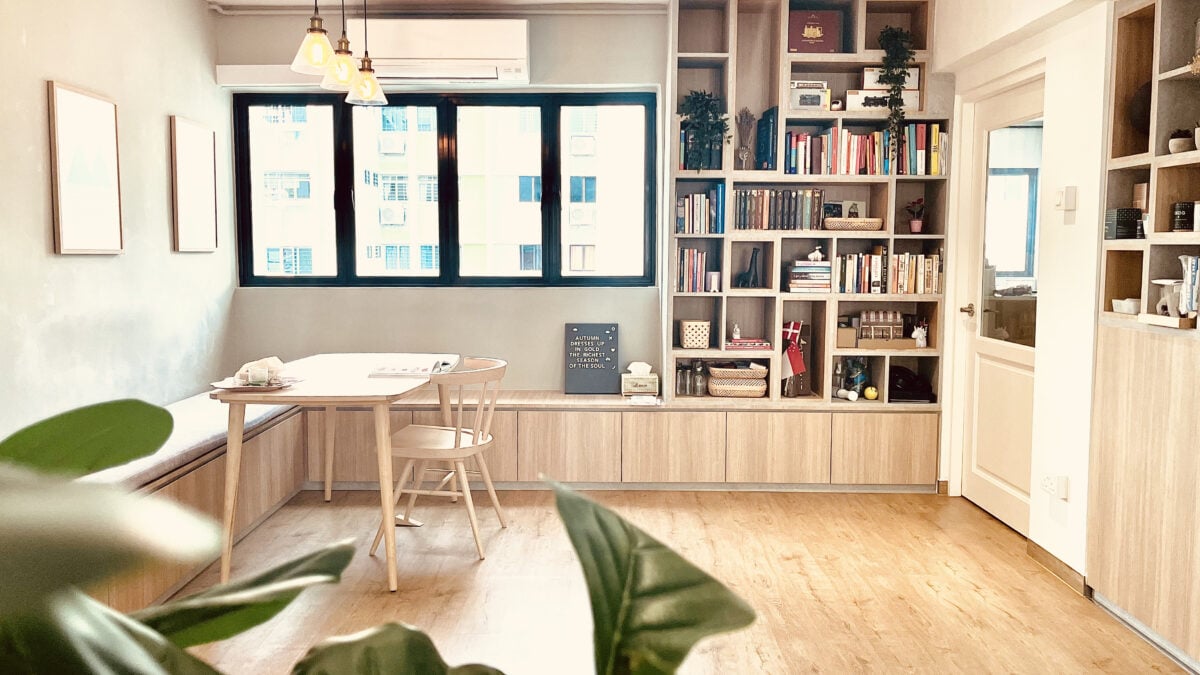 As J and C neared their two-year rental contract, they had to decide whether to renew their rental or consider a more permanent housing option. The couple, now in their early thirties, were renting a condo after they married.

“We wanted to explore how to live independently without our parents whilst exploring housing options. The rental market in Singapore was such that renting a furnished or partially furnished one or two-bedroom condo unit was comparable to renting an HDB flat.”

Another reason for renting a condo was so that they could enjoy the convenience and condo facilities since they were newly married and had no children. In fact, J and C enjoyed living in the condo, as it was just a five-minute walk under the shelter to the train station and mall.

But as the two-year contract was ending, J and C had to decide if they should continue renting or purchase a house. The couple eventually decided to buy a home.

Considered going for either an HDB resale flat or condo

J and C did not see buying a BTO flat as a viable option due to the long waiting time. On top of that, since only one of them is a Singaporean (the other half is Danish), they don’t enjoy subsidies as much as their peers.

(Writer’s note: Couples with a foreign spouse are subjected to restrictions when buying an HDB flat. For instance, if they are to buy from HDB, such as through the BTO exercise, they can only buy a 2-room Flexi flat in a non-mature estate. And like singles, they can only buy when they turn 35.

On the other hand, there are fewer restrictions if they buy on the resale market. This includes being allowed to buy any flat type other than 3Gen and PLH resale flats without having to wait till they turn 35. Nevertheless, buying through the scheme means they are only eligible for grants that are usually for singles.)

After the PR application was approved, the couple sat down and calculated their finances. At the time, as they had only started working for a couple of years, they had two options: a two-bedder condo or a resale HDB flat of a more ‘comfortable size’.

While the couple had also considered buying a new launch condo, it would entail a longer wait, just like a BTO flat. The price psf of a condo was also higher.

“We also looked into buying a resale condo, but whether it was a resale HDB flat or resale condo, the need for a renovation meant that we could bring both options to the standard we wanted.

“We consulted with one of our relatives, a property agent, to delve deeper into the pros and cons of each option and started our HDB house-hunting from there.”

SELLING YOUR PROPERTY? Would you like to know how much your property is worth? Or maybe you’re considering listing your property for sale? Let us know, and we’ll have a consultant reach out to you!

During the house-hunting journey, J and C had a few must-haves:

On top of that, the house should meet the following fringe criteria:

The couple recalled it was the fourth or fifth house that their buyer’s agent brought them to view.

“We had initially wanted to view around three to four estates in the Northeast. This was only our second estate and we fell in love with the space immediately! The rectangular layout of the house and the large living room and dining room, complete with a long and spacious balcony, attracted us.”

Although the house was probably not renovated extensively since the 1980s, the couple saw its potential for a simple, heartwarming house with lots of light.

“The house presented itself to us, and we knew we didn’t have to do much work in terms of hacking to change the layout.”

Like many first-time homeowners, renovation wasn’t something J and C, who work in the education and arts/ heritage sectors, had previous experience with.

In fact, the couple were among the first in their social circle to buy a house, as most of their peers were not married or waiting for their BTO. The couple, who document their homemaking journey on Instagram, also recounted that the local home and renovation community on the platform wasn’t as established at the time of their purchase.

J and C even had a funny story about this. “In the Nordics, where wages are high and individuals usually have more free time outside work, renovation isn’t something you would hire an interior design firm for. It is usually a lot of contractor work and even DIY. So one of us had to first ‘educate’ the other about the renovation scene and market in Singapore, before we even embarked on anything!”

“Luckily, we both work quite well together and did not actually argue during the renovation process. We tapped on each other’s strengths (one of us is more creative and imaginative, whilst the other understands technology, gadgets and measurements better).”

Here’s a summary of their renovation process:

J and C shared that the more experienced ID serving them in the initial ideation stage was no longer guiding, the more junior ID. The couple soon realised that while the junior ID was brilliant in design, he found it tough to project manage on the ground. As the more senior ID had suddenly left the company soon after the handover, the defects were not rectified.

With that, the couple felt that one mistake they made was that they didn’t request a specific designer.

“Therefore, we highly recommend homeowners check with the IDs on their experiences renovating the type of property you’re owning and be really stringent in checking the sites.”

Unlike homeowners in Singapore, Scandinavians tend not to carry out major renovations before moving in

Given the different cultural backgrounds of the couple, there are bound to be cultural differences in home-buying and living as well.

One interesting difference J and C notice is that while buyers in Singapore usually want to start from an empty slate, people in Scandinavia generally move into their new home without carrying out major renovations.

“House-buyers will often reuse the previous owner’s built-in furniture, plumbing and even white goods such as the washing machine and dishwasher. Then, as the years go by, people might decide to ‘get a new kitchen’ or ‘lay a new floor’.

“For us, we ended up with an interesting compromise.”

While the couple did a complete renovation, they retained the existing doors and the old air-con.

“The latter was a mistake, as we would have been able to route the condensate pipe to a drain and get new trunking done much easier.”

Don’t foresee themselves moving out so quickly

For now, it seems this HDB resale flat will be their forever home, as J and C (both of whom have since worked for around six years) are comfortable with it. It has plenty of space for them too, who live in it “with our imaginary pet cat”.

“After spending quite a bit of money, time and effort to move in, we hesitate to make a move so quickly. However, we might rent it out if we need to move overseas for our stints or family.”

One of the things J and C appreciated was having a buyer’s agent, who gave them some advice and helped them filter out the viewings.

“We also visited our shortlisted estates at different times of day to get a feel of the neighbourhood.”

As for the renovation process, the couple strongly recommends that buyers carefully consider what to keep and what to hack, and get a good understanding of the existing state of the house.

“We regret not changing the air-con and were also surprised to find that the previous owners had already done overlay tiles on top of the original floor, so we could have had a slightly higher ceiling if we had hacked the floor.”

HDB flats for sale in the North-East region Bought or sold a house recently? Let us know in the comments section below.

If you found this article helpful, 99.co recommends Parents of 3 bought an Executive Apartment in Hougang and share purchasing and reno decisions and Couple renovated their 4-room Teck Whye HDB resale flat to perfectly reflect their personalities.