When love ends: What happens to the HDB flat when couples split?

We’ve all heard stories of young couples in their 20s, fresh in the first blush of courtship and unsure of their future, deciding to roll the dice and apply for a BTO.

Granted, it might sound crazy to some, but when facing a potential 3-year wait for a flat to be ready, it’s understandable why couples might be tempted to take the plunge and apply for a flat that their relationship’s not ready to handle yet.

Unfortunately, public housing in Singapore isn’t something to try your luck with, and if your relationship (or marriage) breaks down along the way, you might find yourself not only out of pocket, but potentially out of your home as well.

What happens if we break up after applying for, but before booking, a BTO/EC? 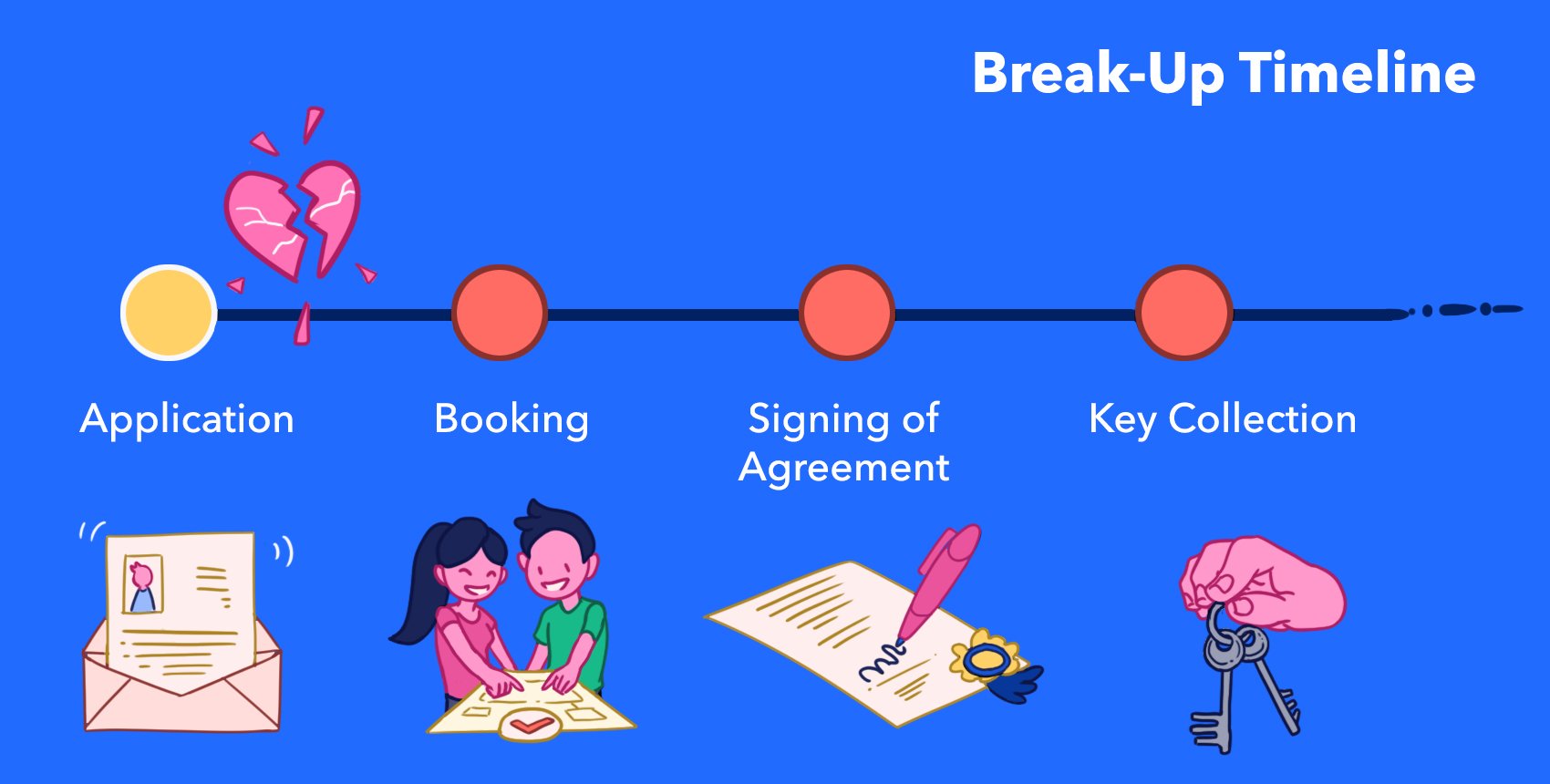 On the financial front, there’s good news: you’ll only lose out on the $10 you paid for the application fee.

You will, however, be considered as having rejected your chance to select a flat, which may affect your balloting chances down the line.

For first-timer applicants (i.e. applicants who haven’t owned any subsidised housing previously), you’ll forfeit any additional ballot chances you’d accumulated from previous unsuccessful BTO applications. It also counts as a first strike against you, so if you later reject another round of flat selections, you’ll have your first-timer priority privileges suspended for 1 year.

For second-timer applicants, don’t worry if it’s your first time rejecting a flat selection. Should you do it a second time, however, you’ll be barred from participating in BTO/SBF sales launches for 1 year.

You get away scot-free here.

EC sales are handled by private property developers, who don’t charge application fees, nor administer balloting priority schemes. So essentially, there’s really nothing to lose in submitting an EC application.

What happens if we break up after selecting a BTO/EC/Resale flat, but before signing an Agreement to Lease / Sale & Purchase Agreement? 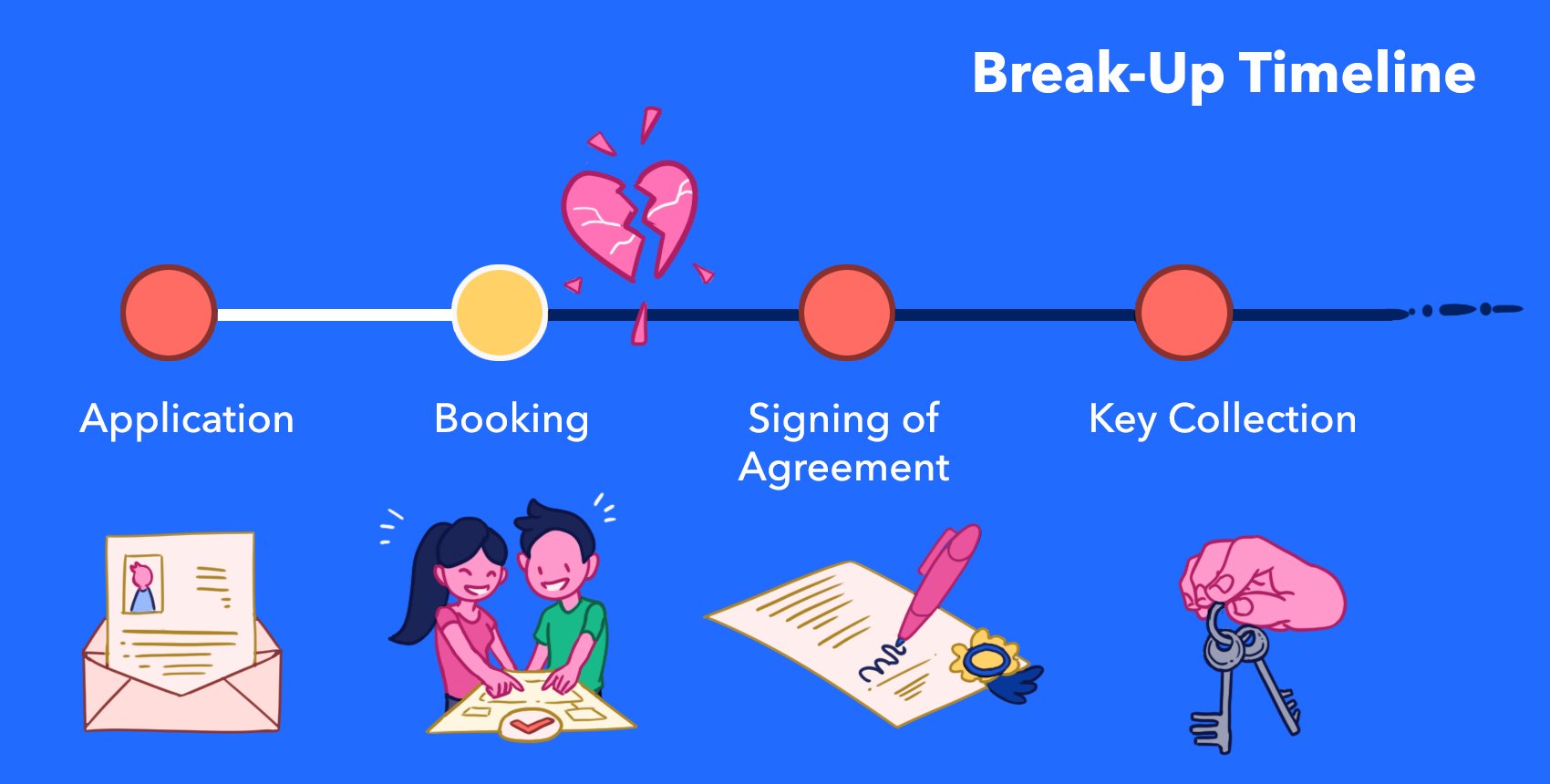 If you choose to pull out after selecting a unit, you’ll be forfeiting the Option Fee that you paid during your booking. The exact amount will differ, of course, according to whether you booked a 2-Room flexi flat ($500), a 3-Room flat ($1000), or a 4/5-Room or Executive Flat ($2000).

You’ll also be barred for 1 year from the date of your cancellation from applying for, or being included as an essential occupier in, a BTO, DBSS/EC flat (from a developer), or a Resale flat with CPF Housing Grant/that has been announced for Selective En bloc Redevelopment Scheme.

On top of that, first-timer applicants will lose all additional ballot chances accumulated from previous unsuccessful bids.

If you decide not to go through with the purchase at this stage, you’ll forfeit to the Seller the Option Fee that you paid for the grant of the Option. This would be between $1 – $1000, depending on the amount the parties had negotiated.

What happens if we break up after signing the Agreement to Lease/ Sale & Purchase Agreement, but before Collecting the Keys? 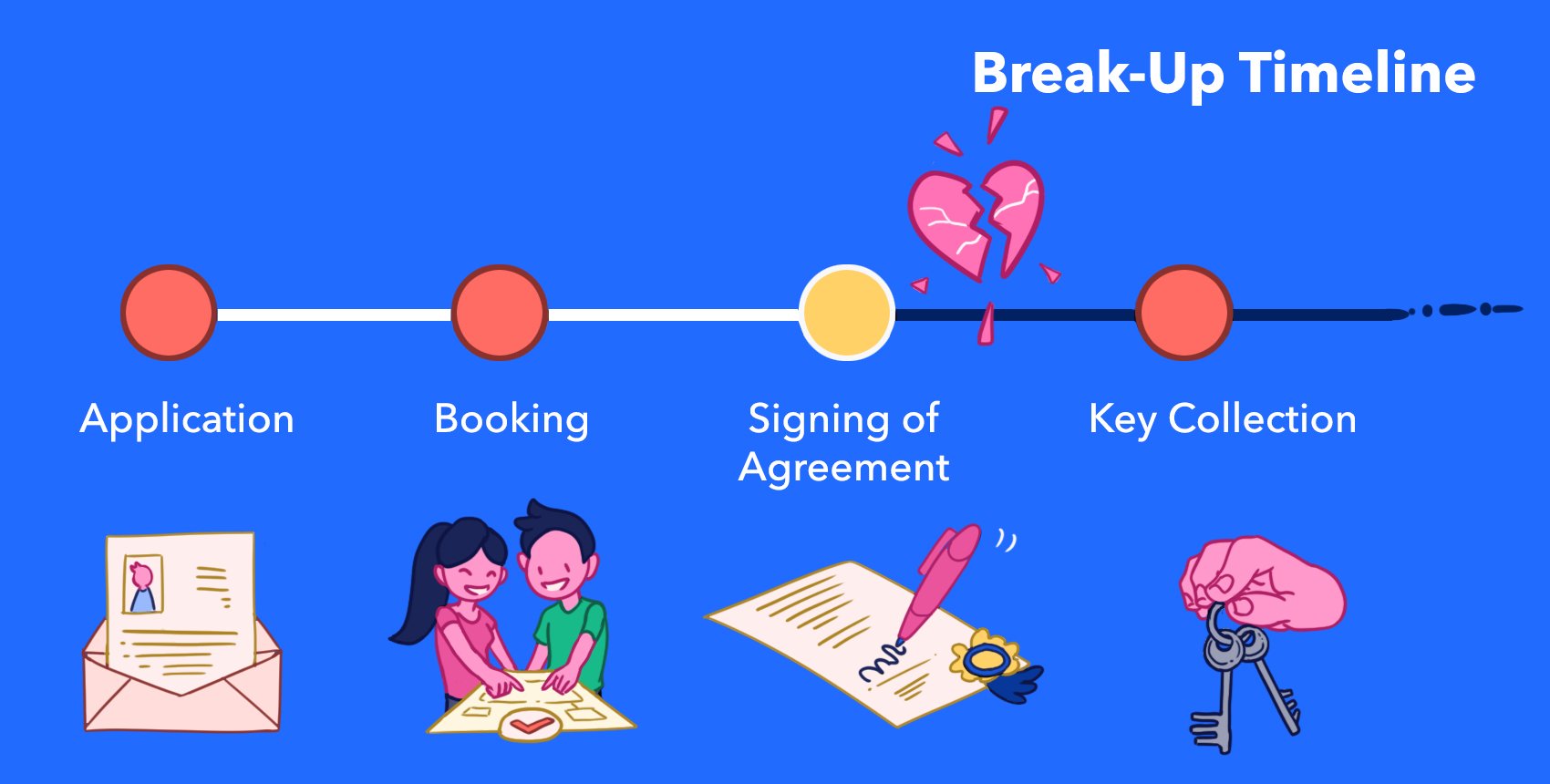 Here’s where the financial pinch starts to get a lot more painful.

Money-wise, you’ll forfeit a sum of 5 percent of the purchase price of the property – for a property worth $300,000, that would translate to a not-so-insignificant sum of $15,000!

In addition to that, you’ll also be forgoing the Stamp Duty and other legal or conveyancing fees you’d paid out on signing the Sale & Purchase Agreement – the Stamp Duty alone on a $300,000 property would be $4,200.

You’ll also be liable to return any CPF Housing Grant you may have used in your purchase, along with any interest accrued. If you can’t repay the amount, it’ll be treated as a debt to the Government, and you won’t be allowed to buy another HDB, DBSS or EC unit until you settle it.

The non-financial repercussions are similar to withdrawing after booking a flat: a 1 year ban from the date of cancellation from applying for, or being included as an essential occupier in, a BTO, DBSS/EC flat (from a developer), or a Resale flat with CPF Housing Grant/that has been announced for Selective En bloc Redevelopment Scheme, plus first-timer applicants lose all additional ballot chances accumulated from previous unsuccessful bids.

Brace yourself for this one.

If you break up now, the Developer has the right to cancel the Sale and Purchase Agreement, and forfeit the 20 percent down payment you made at signing.

As in the case of BTO’s, you’ll also be required to return any CPF Housing Grants used, along with any interest accrued. Failing to do so will result in a ban from purchasing another HDB, DBSS or EC unit until it’s been settled.

Once you’ve exercised the Option to Purchase and signed the Sale & Purchase Agreement, you’re legally bound to complete the transaction with the Seller. If you try to renege on the deal now, the Seller is entitled to sue you for specific performance, which means asking the court to order that you go through with the transaction.

If specific performance isn’t an option (as would be the case here since you no longer qualify for a Resale flat under HDB’s eligibility schemes), then you may be ordered to pay damages instead to compensate the Seller for any loss they suffered due to your failure to complete the sale, as well as for late completion interest.

In this situation, your best bet would be to speak to the Sellers directly and try to negotiate a deal to release you from going through with the sale, without involving court proceedings.

What happens if we break up after collecting the keys? 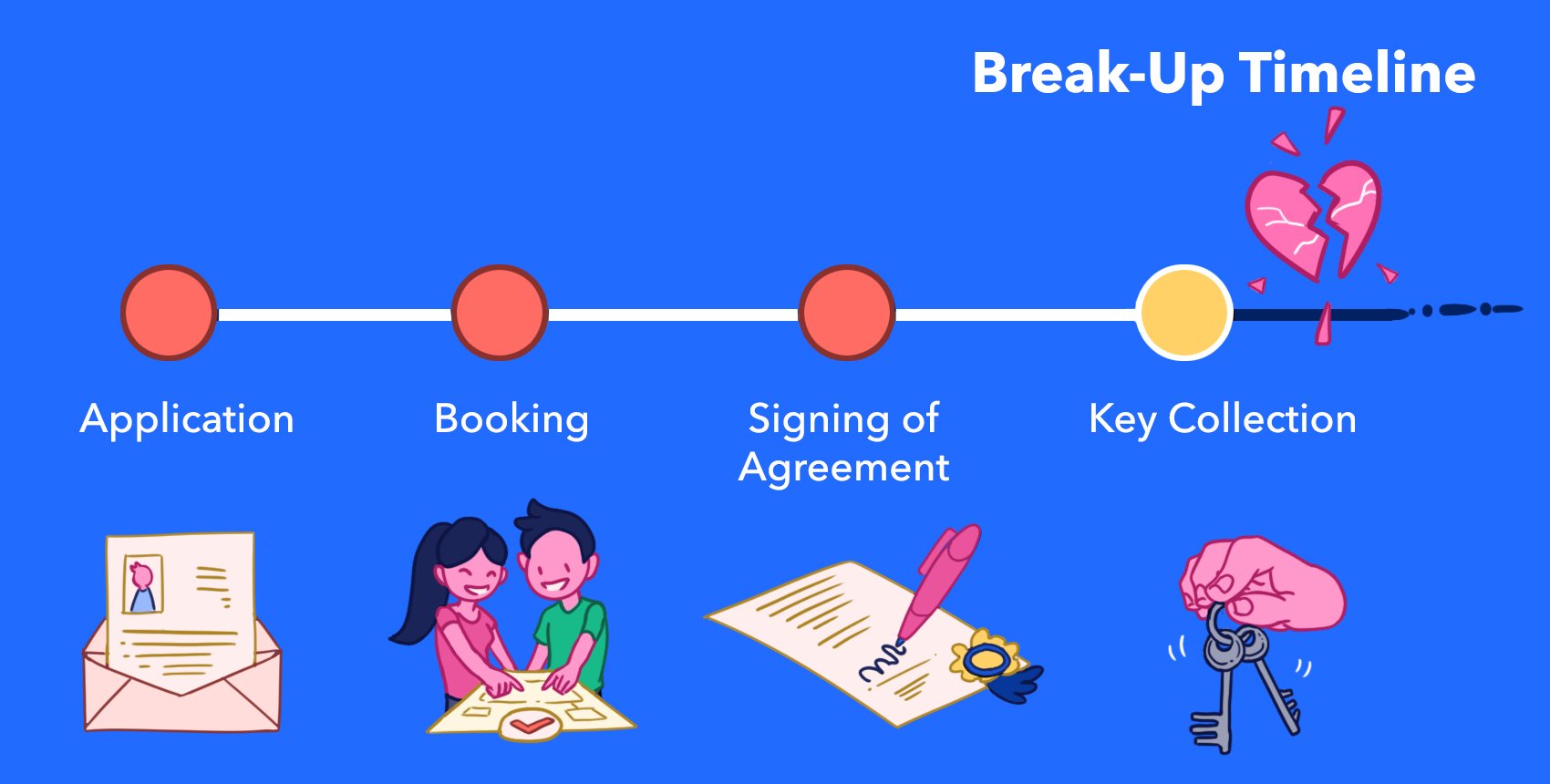 With the keys to your new home finally in hand, you might think the danger’s over.

Unfortunately, that’s just not the case. It may sound draconian, but the reality is that even now, if you and your partner break up after marriage, you will be required to dispose of your flat unless you fall within the exceptions below:

Annulment of Marriage or Break-up of Fiance and Fiancee

If the divorce is due to a non-consummation or annulment of marriage, or you and your fiance break up before marriage, neither you nor your partner will be allowed to retain the flat.

The only exception would be if either of your parents had been originally listed in your application when purchasing the flat, in which case that partner can retain the flat with their parents.

If not, there’s no leeway here. The flat must be returned to HDB, who will provide you with compensation that they deem appropriate.

Assuming the flat is a matrimonial asset, the Courts are left to decide how it should be dealt with. Normally it will allow you to retain possession of your flat in the following situations:

If you have children, the partner who has the child (or children) live with him or her will be allowed to keep the flat.

The divorce must not, however, have been granted on the grounds of annulment of failure to consummate the marriage.

You or your partner may still be able to retain possession of the flat if either of you can (i) qualify under the Single Singapore Citizen (“SSC”) Scheme; or (ii) add another person to help you qualify under any other applicable HDB eligibility scheme.

Note that you’re required to have first satisfied the 5-year MOP if you intend to qualify under the SSC Scheme exception if your flat was bought directly from HDB, or is a resale flat bought with the CPF Housing Grant for Family.

Do note that if one partner is eventually allowed to retain the flat, the other will not be allowed to apply for subsidised housing for the next 3 years.

The parent granted legal custody of the child (including care and control) will be entitled to retain the flat.

Either you or your partner may retain the flat by adding another person to help you/your partner qualify under any other applicable HDB eligibility scheme.

Relationships (and marriage) are far from predictable, so while we’re all for passion and spontaneity, you should definitely take a second before rushing into applying for public housing…just in case. 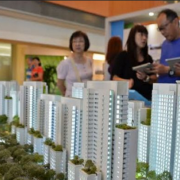 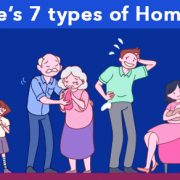 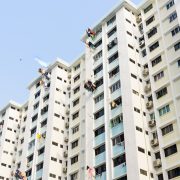 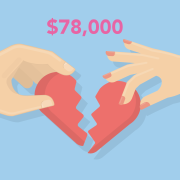