Situated to the east of the Central Region of Singapore, Geylang has long been infamous for being the country's red-light district. Despite this, the neighbourhood is still regarded as a popular residential area due to it being a stone's throw away from the Central Business District. Geylang is losing its notoriety and becoming more attractive as a place of residence, especially for young couples and families looking at the new condominiums that have popped up in the area.

Situated to the east of the Central Region of Singapore, Geylang has long been infamous for being the country's red-light district. Despite this, the neighbourhood is still regarded as a popular residential area due to it being a stone's throw away from the Central Business District. Geylang is losing its notoriety and becoming more attractive as a place of residence, especially for young couples and families looking at the new condominiums that have popped up in the area.

As mentioned earlier, many new condominiums have cropped up within the neighbourhood; this has resulted in the majority of the available houses being private apartments.

Nevertheless, there are a few HDB blocks in the district, and many of these flats are for sale or rent.

Another thing Geylang is famous for is its food and 99.co has no lack of dining spots to recommend in this little foodie zone. While it has long been touted as a supper destination, there are many good eats to be found there during the day as well. Check out the following list of places to eat in Geylang, and continue to explore on your own to find hidden gems in the area! Perhaps the dish most associated with Geylang, one must definitely try the Frog Porridge there. Though some may be squeamish at the thought of eating frogs, it has long been part of Chinese cuisine, and honestly, tastes like chicken, though it has its differences. Head to G7 Sin Ma Claypot Live Frog or Eminent Frog Porridge to try it out! This is also a favourite supper food, as the first eatery mentioned is opened til the early hours of the night. Another exotic delicacy would be turtle soup, which is said to be tasty and nourishing; try it at Turtle House, which is open until 12am, and so is also a possible supper destination! The less adventurous need not fret; Geylang's food scene is not well known only for its exotic dishes. Try out some amazing and authentic Penang food at Penang Seafood Restaurant at Lorong 25A Geylang, or stop by Geylang Claypot Rice for a pot of piping hot, fragrant rice.

Geylang has two small shopping centres, City Plaza and Tanjong Katong Complex. Unlike modern shopping centres, which feature fast fashion outlets and glaring fluorescent lights, these shopping centres offer a glimpse into the '90s, with more boutique stores than international brands. Walking around in them is an interesting experience, and there are many bargain buys to be found. Residents head to Geylang Serai Market to buy their groceries from the first floor. The second floor of the complex is a maze of fascinating stores selling local goods: spices, delicacies, and traditional Malay outfits. A similar mix of stores can be found at Joo Chiat Complex, in addition to stores selling fabric, household tools, and more.

Geylang hosts the island's largest indoor climbing gym, Onsight, which would be great for thrill-seekers and sports enthusiasts who embrace heights.

In addition, many residents tend to meet and gather at one of the many coffee shops at night to have a beer and chat - the Singaporean version of hanging out at the pub.

As such, the neighbourhood is easily accessible by public transport, especially when including the many bus services that run through the district.

Serving residents in the Geylang Neighbourhood, Geylang East Public Library is located at 50 Geylang East Ave 1. The library features a nature-themed look and has a floor area of 3,817 square metres. With over 250,000 items for its collection, the largest proportion comes from English children’s books. The three-storey library is also the first public library in Singapore to have a special thematic collection on cookery and food-related literature. To be exact, the first level of the library is the children’s section with a parenting collection and a storytelling room. The second floor houses the adult and young people’s sections. It contains multimedia services, audiovisual materials, and newspapers and magazines collection. Level three of the library has an exhibition hall, meeting rooms, and a 200-seat auditorium. On top of that, Geylang East Public Library has joined Jurong Regional Library and Toa Payoh Public Library to become a host of smart work centres. These three library-located smart work centres are aimed at allowing residents to work nearer their homes, thus promoting work-life balance and productivity. The centres have rooms for meetings, with a secured wireless internet as well as video-conferencing, copying, and printing facilities. 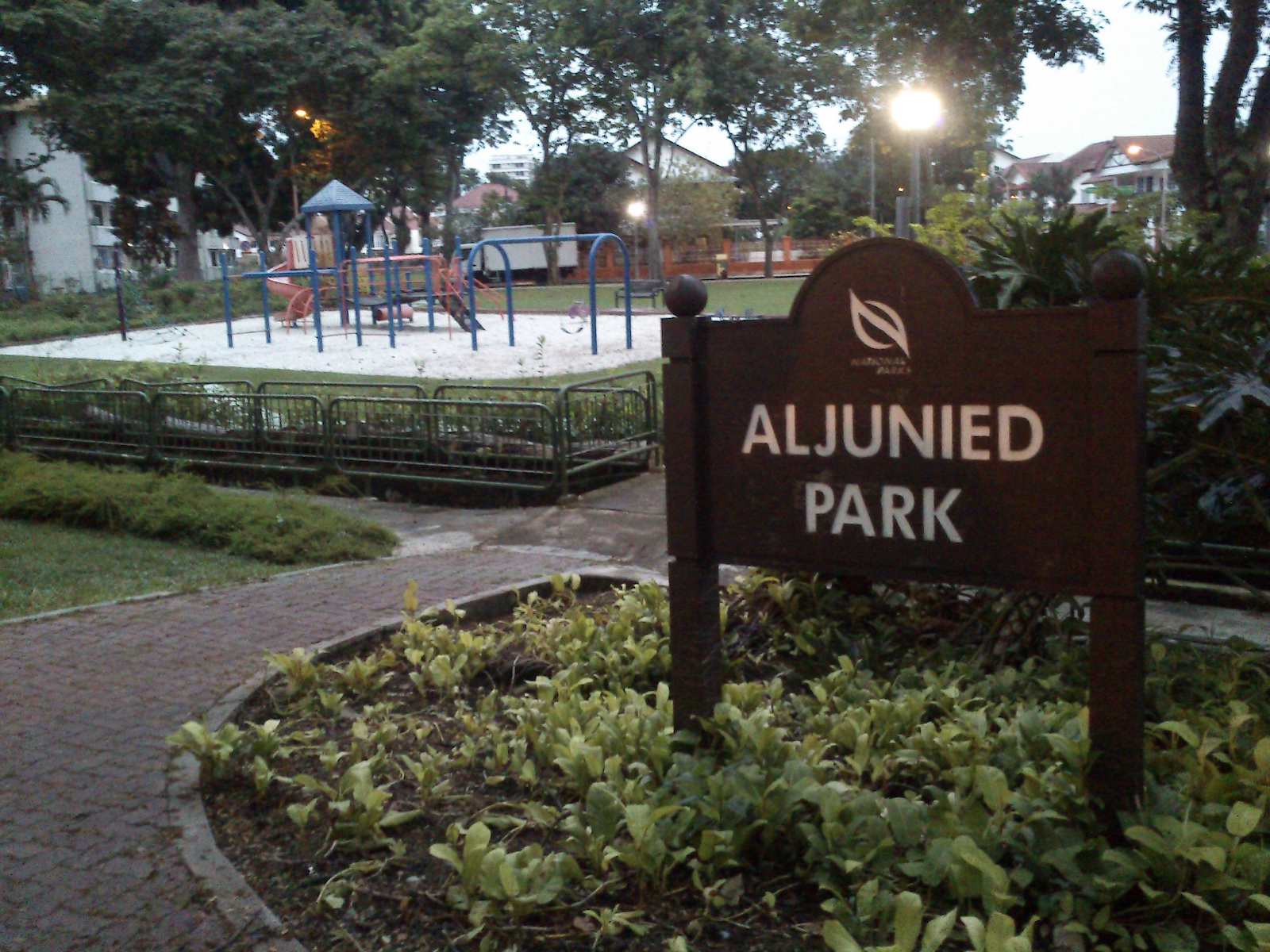 A perfect place for picnics and playing in the grass is Aljunied Park. Located along Aljunied Road, the park has plenty of large grassy areas for games as well as an outdoor playground for young children. It is also a suitable place for your morning exercise, for it provides a quiet open space where you can get a dose of fresh air. As for more diverse features for sports and entertainment, head over to Joo Chiat Terrace Interim Park. The park provides indoor, outdoor, and event conducting areas. It offers a lot of family-friendly sports facilities such as a bowling green, tennis and basketball courts, adventure playgrounds, and an outdoor gym. Wheelchair access is also available, so the park can offer better accessibility to residents of Geylang. Other parks within the neighbourhood include the Ceylon Road Interim Park which provides a lovely place with excellent facilities. A peaceful green space that offers a range of scenery is the best way to describe this park located at 122 Ceylon Road. It has a small playground, picnic benches, walking trails, an outdoor gym, and areas available for indoor activities.

Geylang is home to the Singapore Badminton Hall, which was opened in 2011. Located at Lorong 23, the badminton hall has 14 Olympic-standard courts, permanent seatings of 400 spectators, and VIP galleries with a total area of 2,500 square meters. The hall is divided into two sections: a premier section of six courts in an air-conditioned complex, and a deluxe section of eight courts without air-conditioning. Outside the main hall, there is also a gymnasium and 14 dormitory rooms for badminton trainees. It currently serves as a sports venue for badminton training and main tournaments like Singapore Badminton Association National Age-group Doubles Championships and the Li-Ning Singapore Youth Invitational Series. As for the aquatic sports facilities, residents of Geylang can head to 601 Aljunied Crescent where Geylang East Swimming Complex is located. There are competition, teaching, and wading pools available in the area. You can get swimming lessons here as well throughout the week. On top of that, there is also the Geylang Field at 30 Lorong 12 managed by Sport Singapore.

(All images sourced from Pixabay and may not be representative of places and items discussed in the article.)