Both are part of the Reserve List. While developers can apply for these sites, they’re not released for tender immediately, unlike those on the Confirmed List. These sites will only be put up for tender when developers have bid for a price accepted by the government.

On the other hand, sites on the Confirmed List are launched on schedule regardless of demand.

This launch comes after the record-setting bid two days earlier on 25 May for a GLS site in Tengah, which will be the first EC in the estate. So it comes as no surprise that the top bid, at S$400.32 million, or S$603.17 per sq ft per plot ratio from City Developments (CDL) and MCL Land, is a record bid for an EC.

What’s unique about this EC site is that it will be within walking distance to Tengah Town Centre, where Tengah MRT will be. So far, ECs are generally far from the MRT. So its proximity to the MRT is probably also why the site attracted seven bids.

But the site that’s more exciting is the condo site at Ang Mo Kio, which received 15 bids. The winning bid is also the highest bid at S$381.38 million or nearly S$1,118 per square foot per plot ratio, which is considered high for a site in the OCR. The bid came from a joint venture between UOL Group, Singapore Land Group and Kheong Leong Company.

But maybe for a site that’s within walking distance to the upcoming Mayflower MRT and within 1km of two popular schools, Ai Tong and CHIJ St Nicholas, the high bid may just be worth it for the developers. How much people are willing to pay in the end is another story.

As the number of unsold units is diminishing, developers need to replenish their land banks. One way to do so is by bidding for GLS sites. Besides the sites on the Confirmed List, developers now have more options with these sites on the Reserve List.

[You can also view our analysis of these sites and other land sales here.]

Here’s our analysis of the Reserve GLS sites

Out of the two sites, this is the more centrally-located site. Connectivity has also improved over the years, as more MRT lines serve the area.

Currently, the nearest MRT is Dakota MRT, which is around a nine-minute bus ride from the condo site. When Tanjong Katong MRT opens in 2024 as part of the Thomson-East Coast Line (TEL), it will be the nearest MRT at just 10 minutes walking distance. We also like that Paya Lebar will just be one stop away, while those who work in the CBD can reach there in six to seven stops. For drivers, East Coast Parkway will just be a few minutes drive.

What’s also noteworthy is that this condo site is close to prominent schools like Chung Cheng High (Main), Haig Girls’, Tanjong Katong Girls’, and Tanjong Katong Primary and Secondary. These schools are all within a 10-minute walking distance. For those who prefer sending their kids to an international school, Canadian International School will just be a three-minute walk.

When it comes to food, residents will be spoilt for choice with the number of eateries down Tanjong Katong Road. The site is also pretty close to Katong V and Parkway Parade.

But the main draw for buyers will probably be East Coast Park, which will just be a few minutes drive away. Given how going to parks has become the new national pastime for Singaporeans, this is one site to look out for.

Another highlight is that the area is surrounded by lots of landed and low-rise developments, so residents can expect to enjoy unblocked views. Maybe except the east stacks facing Haig Court.

Chances of getting a sea view are pretty low too. We noticed that there are a number of high-rise condos closer to the sea, such as One Amber and The Esta, and the upcoming Amber Park.

Despite the good location, it’s hard to tell if this site will be put up for tender. With more than 600 units to be developed, it might be too big of a project for developers to undertake now, given the construction delays and ABSD deadline. We’ll still see a condo launched here, but probably not anytime soon.

Located further east is this EC site. It’s right next to the Parcel A EC site that was launched earlier in April. So we’re not exactly sure why this Parcel B is launched for application when Parcel A has not been sold yet.

Nevertheless, like Parcel A, this site has a pretty good location for an EC. For starters, it will be within walking distance to the future Tampines North MRT as part of the Cross Island Line. Expected to be ready in 2029, it will connect the east, west and north-eastern part of Singapore.

For now, the nearest MRTs are Pasir Ris MRT and Tampines MRT, which aren’t that near because it takes around 30 minutes by bus to reach either MRT. But the area, including the road and BTOs at the south of the EC site, is still under development. So connectivity should be improved as the area takes shape.

What we like about the site is that amenities are pretty accessible. Why bother going to town when there are lots of shopping malls here! There’s Tampines One, Tampines Mall and Century Square at Tampines, and there’s White Sands at Pasir Ris. Closer to this EC site are IKEA, Courts and Giant.

For recreation, residents have plenty to choose from; Our Tampines Hub, Tampines Eco Green Park and Downtown East will all be in the vicinity.

We notice that the north stack is near Tampines Expressway, so it can get pretty noisy there. There’s also a low chance of getting an unblocked view since the EC will be surrounded by lots of high-rise residential developments such as the Parcel A EC, BTOs and condos like Elias Green. Given the number of BTOs here, it’s a good site for an EC for upgraders who don’t want to move out of the area.

26 July 2021 Update: The top bid for the adjacent Parcel A, has been awarded to Qinjian Realty and Santarli Construction for S$422m, or S$659 per sqft per plot ratio (psf ppr).

If you found this article helpful, 99.co recommends 3 more condo sites are released by the government for 2020, and here’s our analysis and Four sites in Balestier, Toa Payoh, Bedok and Jurong East to be cleared for housing: A closer look at what it’s like living there.

Looking for a property to buy or rent? Find your dream home on Singapore’s largest property portal 99.co! Do also check out 99.co’s new land sale page here where you can filter and search land sales, en bloc sales and so on. 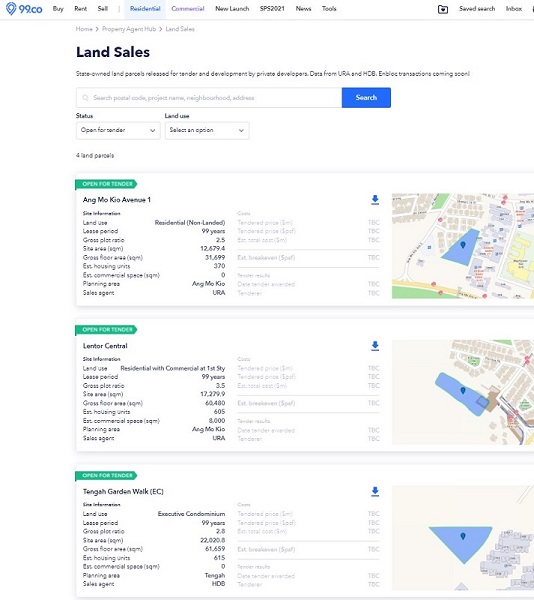