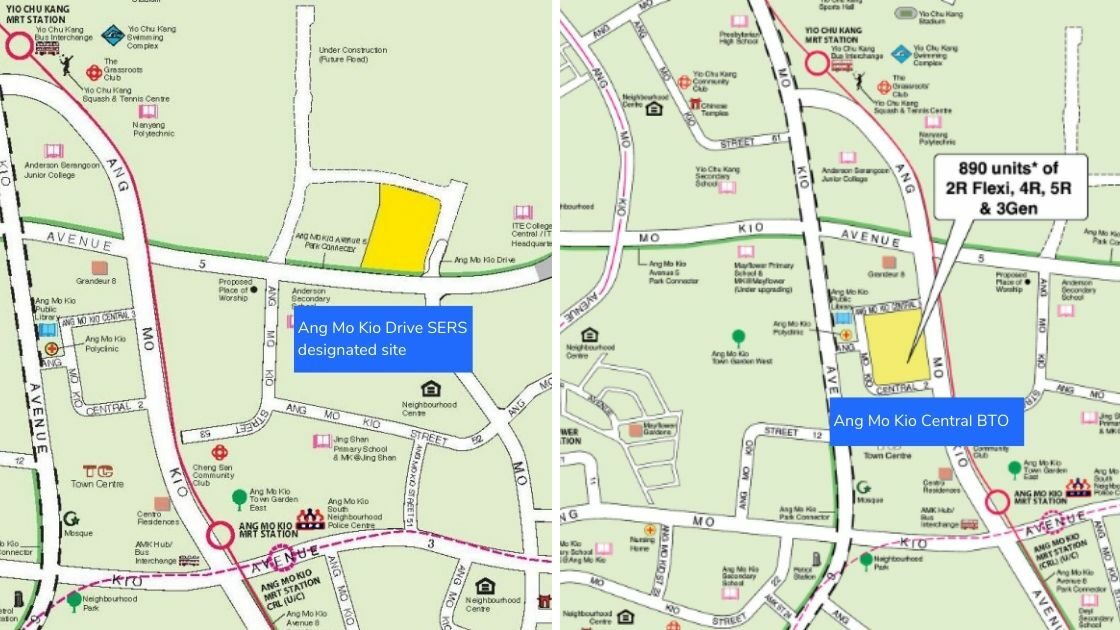 Straits Times and CNA recently reported that those affected by the Ang Mo Kio SERS can get priority if they apply for the Ang Mo Kio BTO in the upcoming August 2022 HDB BTO exercise.

Besides the Ang Mo Kio BTO site, flat owners affected by the SERS can also enjoy priority if they decide to apply for either of the following projects in the August 2022 BTO:

This 10% priority is actually not a new option. We note that during the first SERS announcement, the 10% priority for BTO application was already included in the SERS benefits. On the other hand, at that time, HDB did not mention which were the eligible projects.

As you can see in the screenshot, the priority doesn’t apply if you’re applying for a Community Care Apartment or a unit at a Prime Location Public Housing (PLH) BTO project.

(This should also indicate that the Ang Mo Kio BTO won’t be a PLH project. Instead, there’s a high chance that the two Bukit Merah BTO will be PLH projects, since they’re not among the eligible projects that owners can enjoy the 10% priority).

The recent reports come after the announcement of two new housing options for SERS flat owners in July. MND had announced that owners aged at least 45 can opt for a unit with a 50-year lease instead of the full 99-year lease. Another option is to take up the Lease Buyback Scheme for the existing flat to monetise the flat and fund the purchase of the replacement flat.

These options were offered after residents expressed concerns about having to top up extra money for a similar-sized replacement flat.

Should Ang Mo Kio SERS flat owners opt for the replacement flat at the designated site or the Ang Mo Kio BTO?

We’ve heard that some residents have asked for the August 2022 Ang Mo Kio BTO to be offered as a second designated site, on top of the Ang Mo Kio Drive site.

And given that HDB has said that the flat owners can get priority for the Ang Mo Kio BTO, we decided to do a comparison analysis of both sites and chances of getting a BTO queue number.

The good thing about this SERS replacement site is that there’s a good range of amenities nearby. Cheng San Market and Cooked Food Centre is just a five-minute walk away. It’s also where you can find a Giant Express and various neighbourhood shops for your daily essentials.

Closer to the site, there’s a Sheng Shiong Supermarket at ITE College Central. And within the development, there will be an eating house, shops, a kidney dialysis centre and a child care.

As for school options, just like the Ang Mo Kio BTO site, there’s a good range of schools nearby, from the primary to post-secondary level:

But unlike the BTO site, this site only has one primary school within a 1km radius (Jing Shan Primary) of it.

In terms of recreational options, it’s around a 20-minute bus ride to Yio Chu Kang Sports Hall, Stadium, Swimming Complex, Squash and Tennis Centre. So in this aspect, there’s not much difference when compared to the BTO site.

On the other hand, this replacement site is not as accessible as compared to the Ang Mo Kio BTO site.

For starters, it’s around a 16-minute walk to Ang Mo Kio MRT and Yio Chu Kang MRT (or a 10-minute bus ride). This also means that AMK Hub and Ang Mo Kio Bus Interchange will be 10 minutes away by bus.

On top of that, the nearest polyclinic and hospital are a little further away.

For instance, Ang Mo Kio Polyclinic, which is located next to the BTO site, is around a 35-minute bus ride from this SERS replacement site. (Hopefully by the time the project is ready, we’ll have another bus with a shorter route that goes to the polyclinic.)

And Mount Alvernia Hospital is around a 20-minute drive from the replacement site.

Nevertheless, there’s a few medical clinics near the Cheng San Market and Food Centre that residents can head to for minor ailments.

Another downside is that the nearest park (Ang Mo Kio Town Garden East) is a little far at around a 40-minute bus ride away. In comparison, the BTO has two parks within walking distance.

Chances of securing a flat

606 households are affected by the Ang Mo Kio SERS, while the total number of flats available at the replacement site is 1,065 units. So all the affected households should be able to get a unit here.

The thing is, the units offered here are 2-room Flexi, 3-room and 4-room only.

On the other hand, there are a few 5-room and executive flats (both types were converted from joining two units of 3-room flats) in the SERS affected blocks. So those looking to get a similar-sized unit will have to look elsewhere, such as the Ang Mo Kio BTO which offers 5-room and 3Gen flats.

This Ang Mo Kio BTO is probably the most popular project among the August 2022 BTO projects (just look at the number of views for our video review). And for good reason.

For starters, it’s around a 13-minute walk from both Ang Mo Kio MRT and Yio Chu Kang MRT. In contrast to the SERS replacement site, this BTO is closer to AMK Hub.

This BTO is also closer to the town centre. It has a few smaller malls within walking distance, such as Djitsun Mall, Broadway Plaza and Jubilee Square.

Another thing that stands out to us is that Ang Mo Kio Polyclinic is right across the street, making it an ideal home for the elderly.

And both Ang Mo Kio Town Garden West and East are within walking distance, at a 12-minute walk and an eight-minute walk away, respectively.

Compared to the SERS replacement site, this BTO site is more accessible and convenient. It’s also why some residents have asked for this site to be the second replacement site.

But flat owners should note that with the accessibility and convenience it offers, it’s more likely to come with a higher price tag than the flats at the Ang Mo Kio Drive site.

Chances of securing a flat

As mentioned earlier, 10% of the flats here (or around 90 units) will be set aside for the SERS residents applying and those applying under the Tenants’ Priority Scheme.

Another thing we’d like to point out is that according to the HDB website, this priority is only applicable for 2-room Flexi and 3-room flats.

Since this Ang Mo Kio BTO does not offer 3-room flats, only those applying for 2-room Flexi will be able to enjoy the 10% priority.

Even if you want to apply here because it offers a bigger flat, say a 5-room, chances will be lower.

Secondly, you’ll be considered a second-timer since you’re deemed to have enjoyed subsidised housing as you’ll be getting SERS compensation. Second-timers have one ballot chance, while first-timers have two.

Thirdly, looking at the application rates of past BTO exercises, second-timers have generally registered higher application rates. This is because there’s a lower proportion of flats for these applicants.

It doesn’t help that this project is probably the most popular one among the August 2022 projects.

Nevertheless, if you still want to try your luck at the Ang Mo Kio BTO, you can still go for it without losing your chance of getting a flat at the replacement site.

As explained by HDB in the CNA article, if an applicant decides to ballot under BTO, SBF or open booking, but eventually doesn’t proceed with the application afterwards, they still get to buy a flat at the designated site. The downside is that they’ll be placed at the back of the selection queue.

This also means you might have to pick from the leftovers, such as units facing the rubbish chute.

Ultimately, it depends on what you value more. If you prioritise accessibility and convenience, you can consider balloting for the Ang Mo Kio BTO. But there’s a risk of not being able to secure a queue number as you’ll be considered a second-timer.

So it might actually be better to just settle for a replacement flat at the designated site at Ang Mo Kio Drive instead.

There’s a higher chance of getting a good unit at Ang Mo Kio Drive since you’re not looking at BTO. Plus, you can still enjoy purchasing a 99-year lease unit at a subsidised rate in Ang Mo Kio. After all, it’s a pretty developed estate, so you won’t see many new BTOs offered here in the future compared to other areas like Yishun and Sembawang. Would you choose the BTO site or designated site? Let us know in the comments section below.

If you found this article helpful, 99.co recommends How to apply for a HDB Loan Eligibility (HLE) letter and 40% of invited applicants decline BTOs; first-timers stand good chance of booking a flat.