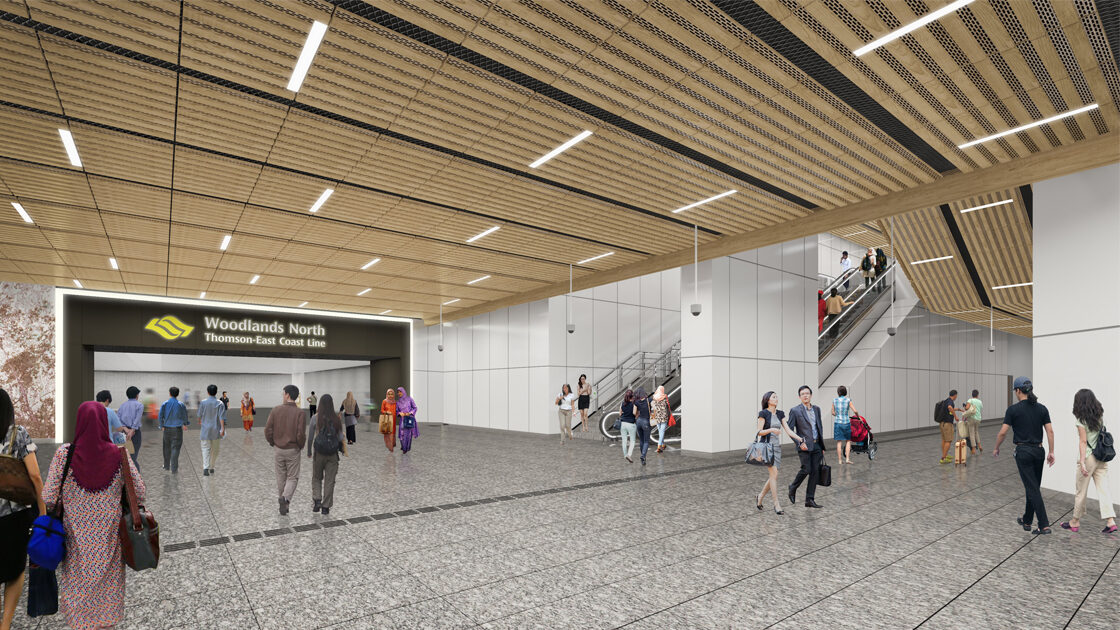 Decades ago, when you tell your friends that you’re heading to northern Singapore, such as Woodlands, most of them will either ask if you’re headed to JB or why you wanted to go to such an “ulu” place. “Ulu” is a Malay term often associated with remote, abandoned or isolated, with not many people there.

Of course, over the years, the perception that Woodlands is “ulu” has changed.

Beyond the improvements in our train networks in the northern areas of Singapore, there are many other factors that have removed the “ulu-ness” of Woodlands. For example, we have better highways that link the northern parts of Singapore to the city, self-contained suburban malls, more eateries and attractions, township master plans and housing developments in these areas.

More recently, despite being classified as a non-mature estate, Woodlands recorded four million-dollar resale transactions for HDB flats (so far) – all of them between May-August 2022. The most recent August sale is a 2067-sqft executive apartment in Woodlands Avenue 1 built-in 1998, which sold for S$1.02m (S$493 psf).

This brings us to the subject of housing appreciation. What are some of the unique reasons we think Woodlands estate has (or will further have) that will completely shake off the ulu tag it once had and become a valuable neighbourhood to live in?

While some estates in Singapore enjoy their new MRT, LRT or interchange stations, residents around the existing Woodlands North Station will get a bonus RTS Link that connects with the Bukit Chagar Station in Johor Bahru by end of 2026.

Unlike the shelved High-Speed Rail between Jurong East and Malaysia, this one’s already under development and looks like a sure thing.

From RTS Link Woodlands North Station, passengers will go through a tunnel before crossing a separate 25-metre-high bridge (in parallel to our current Causeway) across the Straits of Johor.

Each 4-kilometre trip will take about an hour and can serve up to 10,000 commuters per hour during peak periods.

For the Singapore side, the station will be built at a maximum depth of 28 metres underground. It will have three stories, with two basement levels and an underground linkway to the current CIQ building (for immigration).

What’s even more significant to residents around the Woodlands North station is that since the station’s part of the Thomson-East Coast line, they can get to Orchard in 31 minutes or the CBD in 38.

The ability to choose whether to go north (and shop in JB) or south (and catch up with friends in the CBD) is extremely unique, especially if the station (and CIQ building) is near your doorstep.

If you’re a landlord with properties in the area, your tenancy pool would have also increased, since you now cater to residents with family links in Johor who wish to stay and work in Singapore.

Besides the link to Johor Bahru, the next obvious big development is the Woodlands Regional Centre – which comprises of Central and the North Coast area.

Starting from the south, Woodlands Central already links major transportation hubs like the North-South and Thomson-East Coast MRT Lines, and the BKE and SLE expressways.

Woodlands Central is also where major office, retail and F&B hubs are – like Causeway Point, Woods Square and the Woodlands MRT/bus interchange.

Then, there’s the 70-hectare Woodlands North Coast, which comprises Republic Polytechnic, a mix of both public and private housing, and future developments (business park, commercial and industrial estates).

Let’s not forget the waterfront park as well, which, when combined with the upcoming Sembawang Shipyard Redevelopment (which promises a waterfront lifestyle…), might just give attractions at the Greater Southern Waterfront and good, old East Coast Park a run for their money.

Just pay a visit to Punggol’s Northshore Plaza, and you’ll get a general inkling of what’s to come.

From a commercial perspective, this Regional Centre is set to become the largest economic hub in Singapore’s north. As part of the Northern Agri-Tech and Food Corridor, it will spread out over 100 hectares of land and serve as the corridor’s strategic centre.

This corridor will cover industries related to food innovation, such as high-tech, urban, indoor farming, and related industries covering the packaging and distribution of produce. It will also host R&D activities in feed production, waste management and renewable energy.

In other words, expect to see more housing demand in this region over the next several years as office spaces and retail outlets are built up.

Last but not least, there’s the upcoming North-South Corridor (NSC), Singapore’s longest Transit Priority Corridor, scheduled to be completed by 2026/2027.

One main aim of the corridor is to relieve the Central Expressway (CTE) as the current conduit connecting the north to the south.

Originally labelled as the North-South Expressway, it was renamed the NSC as it is not just an expressway but an integrated transport corridor for a walk-ride-cycle future.

It will be Singapore’s 11th expressway at 21.5 kilometres long and linking northern towns like Woodlands, Sembawang, Yishun, Ang Mo Kio, Bishan and Toa Payoh with the city.

When completed, the NSC will include entry and exit ramps with the SLE, PIE and ECP. In other words, it should be faster to get from Woodlands to say, East Coast Park.

What’s unique about the NSC is that it will have dedicated and continuous bus lanes. A typical journey by bus to the city using the NSC will save commuters an average of 10-15 minutes.

The NSC completes the “corridor” concept with the inclusion of cycling trunk routes and pedestrian paths. These, in turn, will link with the Park Connector Network (PCN) and cycling paths in HDB towns.

In terms of housing in Woodlands, the average psf prices in most, if not all property types, have increased over the past 10 years. 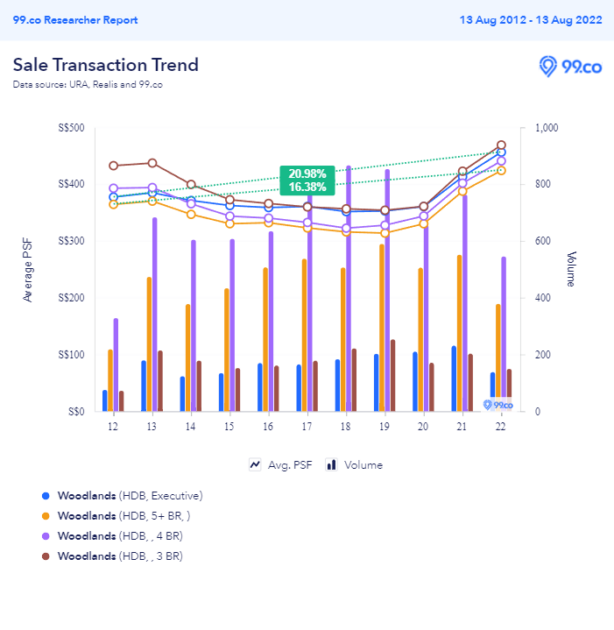 What’s most telling is that the psf price rise for executive HDB flats in Woodlands surpasses Singapore’s overall in the same period – which is currently at 16.98%.

Many of these executive flats, built in the year 1998, have large spaces ranging from 1,539 sqft to 2,067 sqft, and many homeowners are willing to pay about S$475 psf for these large apartments.

In the private condo space (non-EC), 1-bedroom units have seen average psf prices surge by 65.23% over the past 10 years. This is mostly from Parc Rosewood, a 99-year-leasehold condo of 689 units (1, 2 and 3-bedroom), completed in 2014 and located near the Marsiling Flyover. 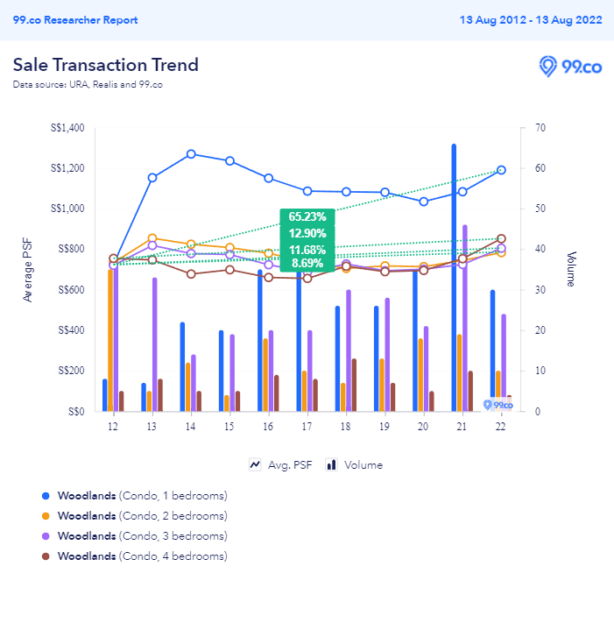 Based on what we’re seeing, there’s a huge demand for larger units in HDB resale, but smaller units in the private condo market in Woodlands. It’s probable that we’ll see more single executives and couples (eg. Malaysians, PRs and other foreigners) looking to buy or rent smaller condo units in the Woodlands area in the immediate term.

As Woodlands’ many master plan developments come to fruition over the coming years, expect these home prices to appreciate even further, partially due to the reasons we’ve shared above. Still think Woodlands is ulu? Let us know in the comments section below.

If you found this article helpful, 99.co recommends August 2022 HDB BTO in-depth review with video: Woodlands and 9 HDB blocks in Woodlands to be acquired to make way for Woodlands Checkpoint expansion.