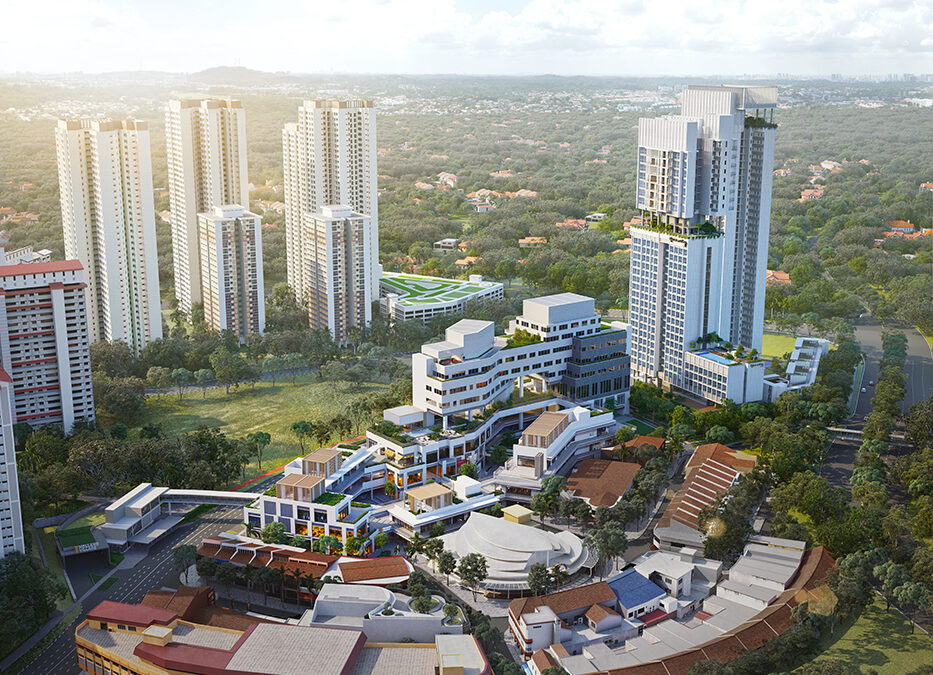 Listed by the URA as one of Singapore’s characterful Identity Nodes — areas with unique identities worthy of preservation — unlike so much of this city-state, Holland Village wasn’t carefully and strategically planned. Instead, its charm lies in the fact that it organically developed over the last 90 years.

Shops and housing first sprang up hereabouts in the pre-war period, catering to the British military bases at Buona Vista. As the enclave increased in popularity, homes of all sizes, from small cottages and terrace houses to grand black and white bungalows, were constructed in the period leading to the 1960s. In the 1970s, HDB blocks and condominiums were built, a trend that continued through the ’80s right up to this day, gradually reshaping a skyline that had once been decidedly low-rise.

This ‘unplanned’ and natural evolution resulted in a charming neighbourhood with an eclectic aesthetic and a true modern-day village atmosphere. While back in colonial times, it was originally home mainly to expats, Holland Village now houses a vibrant, multicultural blend of locals and international residents, dwelling in a diverse mix of landed houses of all shapes and sizes, plus mid- and high-rise buildings, ranging from almost a century old to brand spanking new.

The community here comes together socialising on Chip Bee Gardens and Lorong Mambong at some of the coolest bars and restaurants in town. Holland Village has always been home to a selection of Singapore’s most vibrant and cosmopolitan nightlife, with a number of the city’s earliest wine bars and Italian restaurants having opened here as far back as the 1970s.

When the URA sought tender proposals for a new development that would usher in a new era for Holland Village, their guidelines stipulated that the approved project “be designed along intimate laneways and courtyards to add new residences, retail and lifestyle uses (that would) add to the charm of Holland Village.”

In devising their innovative blueprint for Holland Village 2.0, the development’s architect Siew Man Kok and his team at MKPL Architects set out to conceptualise a harmonious development, one that was “a continuation of Holland Village, that flowed on from the streets of Lorong Mambong and Lorong Liput, adding a new layer of experience.”

The goal, he says, was that someone strolling around Holland Village would experience a seamless transition from the old streets of the area into the exciting new F&B, retail and green public gathering areas that One Holland Village would provide. From there, it would be a smooth segue into the development’s commercial and residential blocks.

“The idea was to be organic and not too ordered,” Siew says. “Because when we studied the structure of Holland Village, we saw clearly, it grew organically. So that’s why you don’t see One Holland Village being aligned in every aspect.” Rather, it echoes the quirky arrangement of the existing village.

In a way, this reflects the type of person Siew believes will gravitate to the development. “I think many of the people who’ll live and work here will be more inclined to the tech and creative industries,” he says. “They’re non-conformists, thinking outside the box. The new generation of Singaporeans, they have a more creative and entrepreneurial mindset.”

Rather than erase the original character of the area, One Holland Village is augmenting it, even bringing back elements of the past — for instance, modern iterations of the colourful markets that once thrived here, as well as hip, interesting retailers of the sort not found in suburban malls.

There’ll be an art-house cinema and the developers have created a multimillion-dollar programme for public art displays and initiatives. With the aim of engaging residents and visitors alike, this multi-year programme will showcase a broad array of art from leading local and international artists, and will also integrate a series of art competitions and events.

Those keen to live within such a stimulating setting have a choice of three distinct residential concepts at One Holland Village. Quincy House Serviced Residences features 255 serviced apartments. Its top eight floors are occupied by Quincy Private Residences, 27 exclusive luxury apartments for sale, including a penthouse. With access via private lifts and exclusive services and facilities, Quincy Private Residences present a lifestyle tailored for the select few.

Closest to street level is Leven, a row of 21 low-rise, two-bedroom homes — a plush modern spin on the shophouses and classic walk-up apartments of Chip Bee Gardens. These offer direct access to the lawn and pool for residents on level one, private balconies on level two, and on level three, exclusive roof terraces.

Sereen, the tallest residential block within One Holland Village, offers 248 apartments with one, two or three bedrooms (the three-bedroom units providing the option of open-concept layouts). In keeping with the new trend for homes that possess the versatility to fulfil a variety of uses, Sereen was designed according to the philosophy of ‘slow living’ — facilitating a seamless transition from indoor to outdoor, efficiently and intelligently utilising space, and providing areas that easily adapt from work to entertaining to quiet moments of reflection.

With a world of entertainment, dining, artisans and craftspeople, quirky retail and the company of like-minded individuals at their doorstep, residents who choose to move here are not simply acquiring an apartment — they are joining the vibrant, creative community of Holland Village.

And yet, there’s more to it than that. Here, you’re not just buying a property — you’re buying into a lifestyle. Holland Village isn’t a place, it’s a way of life. And at One Holland Village, you’re right at the heart of it.