Rediscovering Potong Pasir: The Next Best Thing to Avocado Toast

It’s real, it’s tangible and it’s not the district of your grandpa’s day: Potong Pasir is the next up-and-coming district, awaiting a wave of gentrification.

Not sure what that means? Well, consider the Bugis of today: the name brings up images of top retail and dining, a prime piece of real estate with high-end hotels.

But ask your parents what Bugis was like in the 1970’s and they’ll probably shudder at the thought. In the past, Bugis street was a ghetto with few prospects besides contracting malaria.

It was only in the 1990’s when Bugis started to change. But if you approach any Singaporean younger than 35, most of them will have no knowledge whatsoever of Bugis’ risqué past.

Now, Potong Pasir is following in Bugis’ footsteps and it’s well on its way to becoming the next big thing in Singapore. After surveying thousands of people across the globe about homeownership, including 1,000 respondents from Singapore, HSBC’s Beyond the Bricks 2019 global survey uncovered insightful trends about local home seekers. The survey shows that 12.4 per cent of home seekers cite house capital appreciation as one of the most motivating factors to purchase a house, while 28.1 per cent of respondents were afraid of depreciation in the value of their property.

If you’re looking for Singapore’s next hipster neighbourhood, look no further than Potong Pasir – being mere moments away from transforming into a trend-setting community, its investment potential is unlimited. 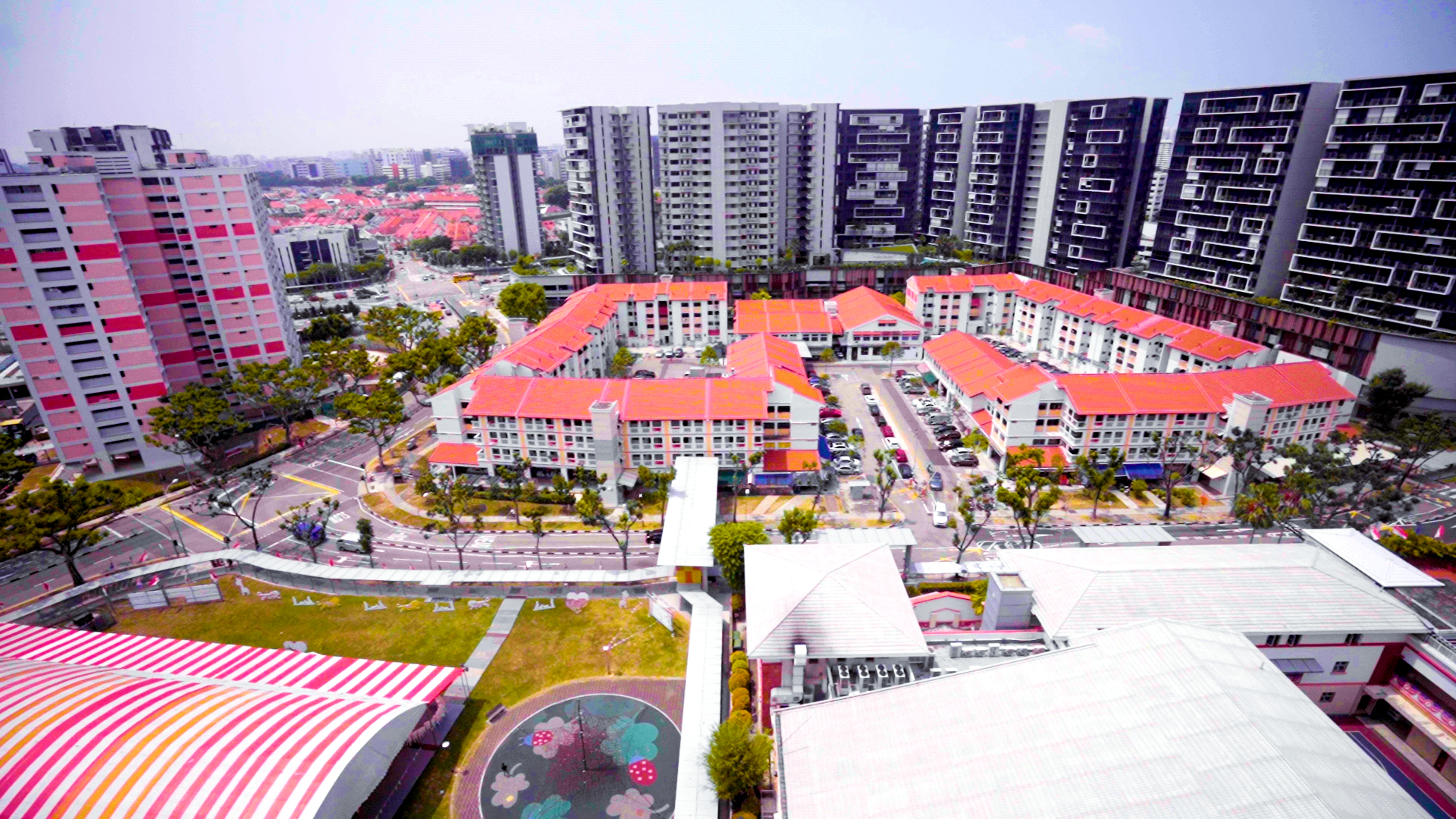 Here are some reasons why you should invest in property in Potong Pasir:

There’s something in common between gentrified (or gentrifying) areas such as Tiong Bahru or Joo Chiat; it was even present in Bugis before the area’s transformation.  It is that common quality  – the spirit of neighbourhood and energy. These neighbourhoods are old, but they don’t feel old – many of them are more alive than younger areas, such as sleepy Sengkang or laid-back Punggol (no offence to those places, they have a placid charm of their own).

Consider the OH! Open House: Potong Pasir, in which residents of Potong Pasir opened their houses to anyone who wanted to view the art, which were in the homes of various residents. Most Singaporeans would balk at the idea of letting strangers poke their noses around. We don’t even let them do that with our browser history, let alone our own homes. But Potong Pasir residents were happy to do it – because of the trust between neighbours.

In Potong Pasir, children still play catching and hopscotch, and shopkeepers still keep money in Horlicks tins, while also accepting mobile payments (such as GrabPay or QR code payments).  Residents as old as 50 shoot the hoops with counterparts as young as 15 and the Potong Pasir Community Centre – despite a lack with cafes and wi-fi hotspots – can still manage a better turn-out than a suburban Paramore concert. It’s pretty lit.

This spirit is indicative of a neighbourhood that’s ready to move up, not slink down. In fact, HSBC’s survey discovered that 23 per cent of respondents in Singapore decide to move in search of a greater sense of community. If you’re looking for a neighbourhood with a big heart and good vibes, Potong Pasir is the place for you.

Potong Pasir is central, but somehow evaded encroachment by big commercial interests. It’s also one of the few neighbourhoods without a major mall within walking distance while old-school family-owned mini-marts and small retail stores are the norm here. It’s only been in the last few years (since about 2015) that chain supermarkets like NTUC found a foothold.

We’d say Tiong Bahru was in much the same situation, which was how it drew the current wealth of artisanal cafes and boutique stores.

With the recent introduction of The Poiz Centre and The Venue Shoppes, Potong Pasir is filled with hidden enclaves for you to explore from cafes to haute home bars.  As the area is not yet commercially saturated or crowded by big chains or independent cafes, retailers will latch onto this golden opportunity to grow as well. These upgraded and upmarket amenities will serve to push property prices up even further, and since redevelopment efforts have only just begun, this neighbourhood has much more room to grow in the future.

3. URA gets awakened when it comes to this zone

According to URA’s 2019 Master Plan, walking and cycling routes will be introduced across Potong Pasir, as well as nearby Bishan and Toa Payoh bridging neighbourhoods and connecting people.

Since 2015, sheltered linkways have been added to provide shelter to the Potong Pasir North-East Line MRT station; and paths connecting Potong Pasir MRT station to the Kallang Park connector to create a more seamless walking and cycling experience. According to HSBC’s research, 25.9 per cent of home seekers are more likely to purchase a property due to new transport links and accessibility; so expect growing interest here.

Upgrades to Bidadari, such as the 10-hectare Bidadari park, or HDB upgrading in Bishan will also have a knock-on effect on property values. The rising home values in Potong Pasir are not just theoretical, you can see it happening: 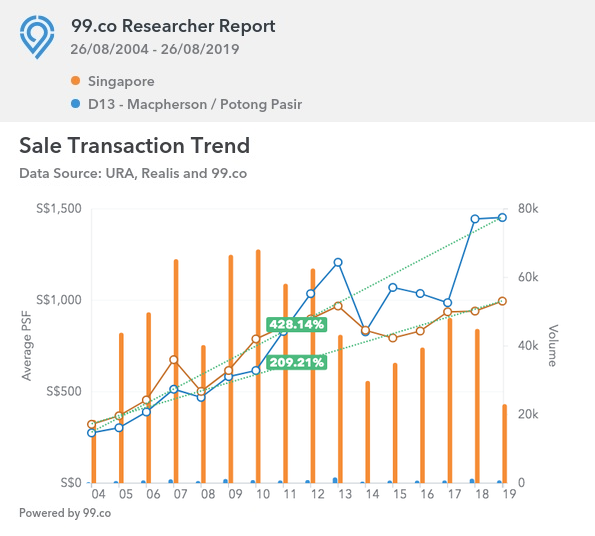 Home prices in Singapore averaged $322 per square foot, back in 2004; today they average $995 per square foot – an increase of about 209 per cent. Impressive – but look at Potong Pasir:

And with the ongoing gentrification, you can expect prices to increase even further.

4. Quirks that are a blast from the past 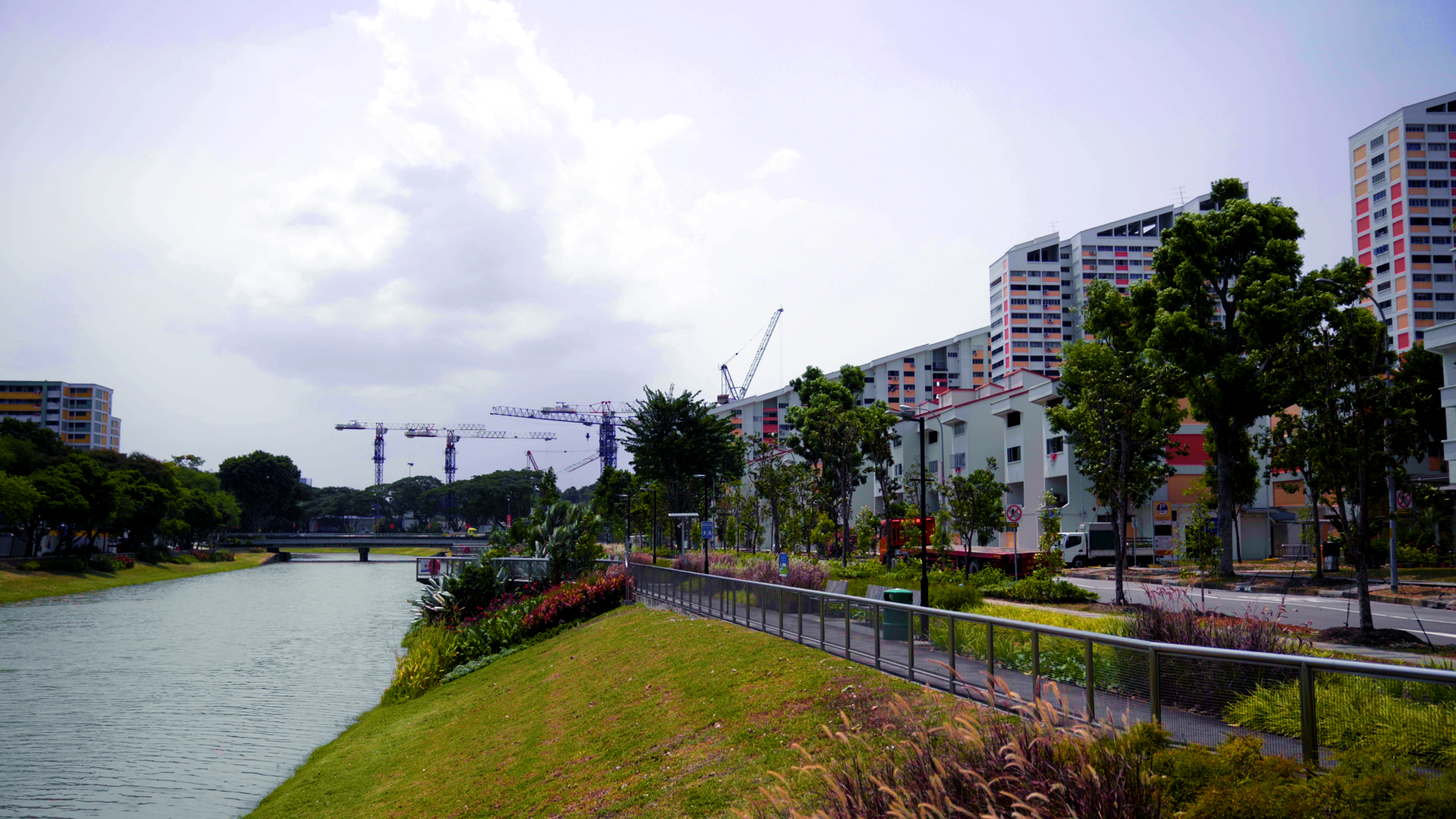 For a neighbourhood to experience gentrification, it needs to stand out. While Potong Pasir’s cultural aura is intense, there are more physical signs of it too:

If you are in search of property with room for appreciation, Potong Pasir is the place right now. Make your move before it becomes completely gentrified and prices skyrocket.

If you’re worried about how to finance a home, we’ve got your back. With HSBC’s suite of Home Loan packages, you can stave off your home loan concerns. Just like an ideal home, a good home loans accommodates your future needs. Speak to an HSBC Mortgage Specialist today. 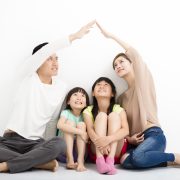 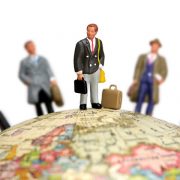 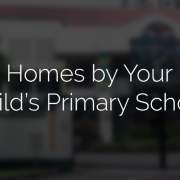