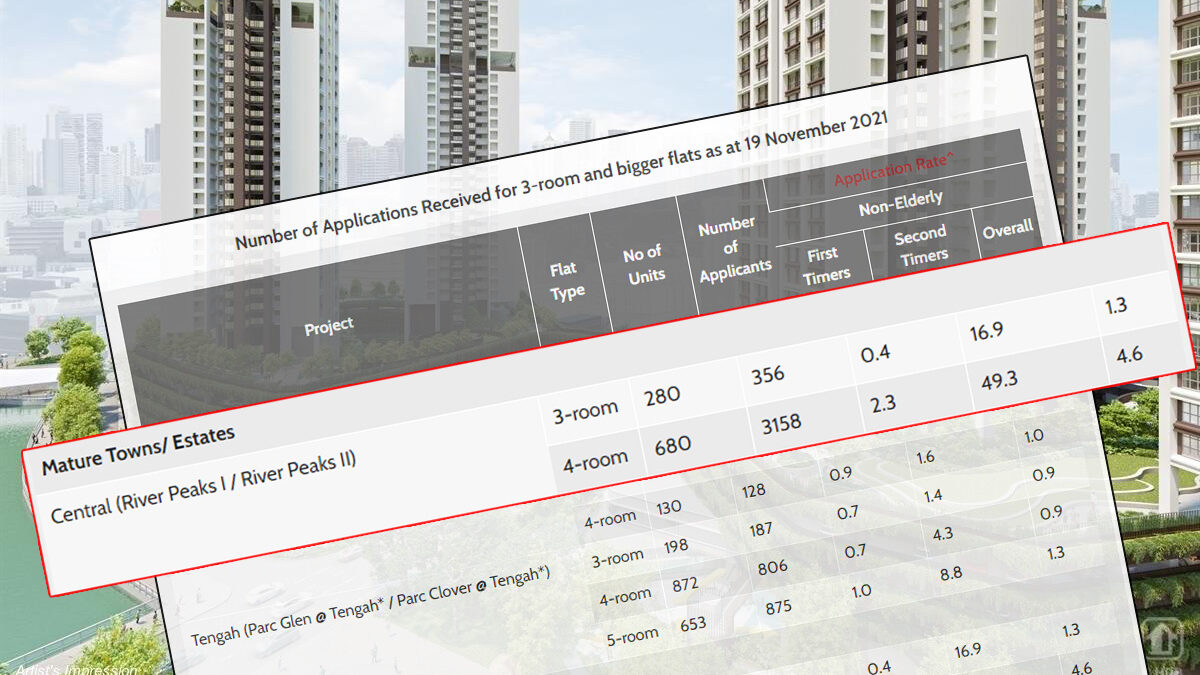 Besides River Peaks, 2-room Flexi flats at Choa Chu Kang’s Heart of Yew Tee clocked the highest application rate so far – 5.4 times. The obvious reason is that there’s only 68 short-lease 15-45-year-old flats catered to just seniors (55 years and above) as part of the Yew Tee Integrated Development.

You can monitor the application rates of all nine projects in this November 2021 BTO exercise over the next few days here.

So it’s interesting to see that demand for 4-room flats under the Prime Location Public Housing (PLH) model registering as one of the highest among the different BTO projects, despite factors like:

For the last point, it means if you’re applying because your parents or children live in the same area, your chances of securing a flat is lower compared to the other projects (due to lesser allocation).

However, we should note that these application rates pale in comparison to the last BTO exercise in August 2021, when 10,602 applicants vied for 459 4-room flats in Hougang’s precinct (particularly Kovan Wellspring).

So with the current momentum for Rochor’s River Peaks, does this mean Singapore home buyers are accepting of the prime location public housing model, particularly the 10-year MOP?

The bigger question is – when these flats are primed for resale by 2038 (the estimated year River Peaks can be sold in the open market), will there be enough demand from resale buyers:

In case you’re not aware, the income ceiling remains for resale buyers for PLH flats. This means for 4-room flats, the resale buyer must have an average gross monthly household income not exceeding S$14k, or S$21k (if purchased with extended or multi-generation family).

For 3-room flats, the ceiling is S$7k or S$14k (depending on the project – though this detail isn’t readily available on HDB’s main launch page for River Peaks). The resale buyers must also remain in the flat for the next 10 years (and can only resell by 2048, assuming they purchased in 2038).

In other words, the pool of potential buyers for PLH resale flats will definitely be lower. If resale prices were to appreciate to levels beyond the means or eligibility of securing a home loan (due to income ceiling), these buyers may need to be cash-rich.

Based on the above limitations on resale, it is highly probable that a large percentage of the current 3,514 applicants for River Peaks I and II do not have intentions to resell their PLH flats after 2038. This means the 10-year MOP matters less to them than the centralised conveniences of living in Rochor.

Maybe a few of them used to throng the now-defunct Sungei Road flea market (the current River Peaks site) every weekend and still feel a sense of nostalgia for the place. Perhaps the idea that they could step out of their block and go anywhere from either Rochor MRT, Bugis MRT or Little India MRT station without the need to drive a car appeals to them.

Since the PLH flat is aimed towards owners forming a family nucleus, there are only two primary schools within 1km of River Peaks – Farrer Park Primary (which would have merged with Stamford Primary in 2023) and St. Margaret Primary (which will move to Wilkie Road in January 2024). So existing homeowners in nearby neighbourhood condos may expect primary school admissions to be competitive after 2028.

Retail-wise, there’s also Berseh Food Centre, Tekka Centre, Arab Street and Haji Lane nearby. If residents want to watch a movie, they can take a 12-minute stroll to Bugis Junction or Bugis+, or hang out at the National Library.

Granted, between now and then, based on the ever-adaptive housing environment and home prices we’re seeing these days, the PLH model may change. As single Singaporeans clamour for HDB to be more inclusive with its PLH policy, the restrictions may either tighten or loosen over the next decade or two.

Hypothetically, if a homeowner secures a 4-room flat at S$582k before grants, holds it till 2038 and manages to sell it for S$1.2m to another cash-rich Singaporean couple, he’s probably still looking at a potential gross profit of at least S$546k after the 6% clawback. That’s a hypothesis some of the applicants may harbour and pine for still.

It’s not exactly a Singaporean dream set in stone. But it’s still a dream thanks to the stories we’ve seen from [email protected], Natura Loft and The Peak.

Do you agree that Singaporeans are accepting of the PLH policy thanks to the current demand for River Peaks? Let us know in the comments section below or on our Facebook post.

If you found this article helpful, 99.co recommends How to increase your HDB BTO ballot chances and 5 things you must know before you apply for a Sale of Balance Flat (SBF).