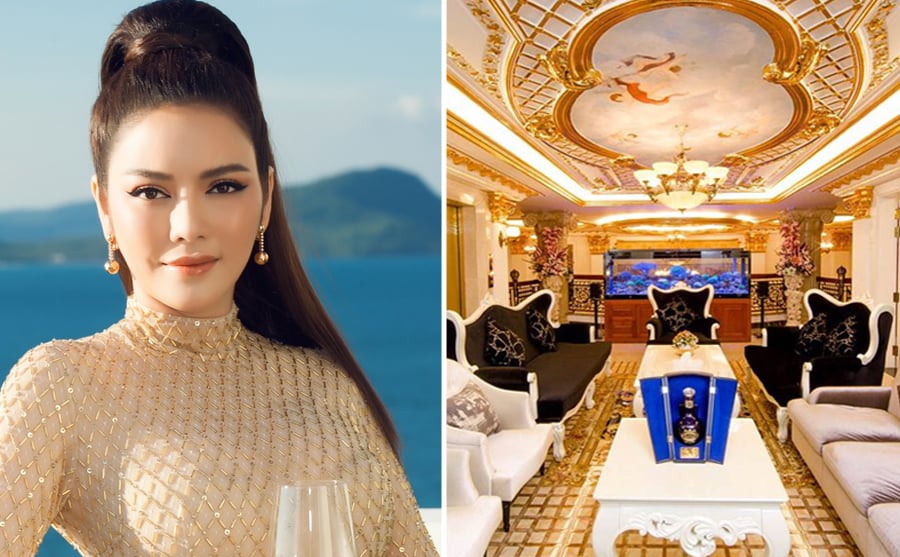 After participating in a handful of film and television productions, Ly Nha Ky left acting for a decade, only returning recently with the film Secret of Paradise (2020) alongside Korean actor Han Jae-suk.

She launched her talk show Tra Chieu Cung mo Chanh (Afternoon Tea with Posh Lady Ly Nha Ky) in 2022, where she invites various media personalities to her house and chats about intimate topics over afternoon tea.

Throughout her years, Ly Nha Ky has built an empire and amassed an impressive fortune for herself through real estate, investments, media production, jewellery, and high fashion.

Ly Nha Ky doesn’t just boast a large bank account; she is also a prominent philanthropist and gives back generously to her community.

She also serves as an ambassador for Operation Smile in Vietnam and Vietnam’s Tourism ambassador.

Rumoured to be worth a whopping US$17 million (S$22.84 million), the 39-year-old single millionaire enjoys living a fabulous lifestyle in her 25-storey apartment building located in the Thai Dien luxury residential area of District 2 (HCMC) overlooking the Saigon River.

Her Ho Chi Minh City mansion is adorned with intricate gold trimmings in its Grecian-inspired interior, as well as a swooping marble staircase, giving it an opulent vibe.

She demolished and rebuilt the 26-apartment building from the ground up, tailoring it to her liking. Her chefs and staff live in the same building as her.

It boasts a studio with high-end filming equipment where she films her talk show, a karaoke box and an entertainment room with a pool table and various arcade games. There is also an in-ground jacuzzi with a rain shower to unwind after a long day.

Ly extends her generosity to her family, building a whopping 108,000 sq ft villa for her mother in her hometown of the Ba Ria-Vung Tau province.

The mansion was built in the style of Vietnamese classical architecture with red tiles and wooden furnishings, took six years to complete construction and was only finished in 2020.

The residence features three compounds – a spacious worship room with intricately carved altars, a family room and an area for parties and receptions. It also has a garden with a lotus pond, a 1000-year sago palm and various fruit trees.

Besides her personal residence and the villa she built for her mother, Ly also owns a multi-million dollar luxury resort in Da Lat spanning 7,000 square meters (75,347 sq ft), alongside an organic fruit and vegetable farm.

With her strong passion for design and architecture in the real estate market, the savvy businesswoman believes in starting new construction projects almost every year to welcome Tet, the Vietnamese Lunar New Year.

Rolls Royce and a Ferretti yacht

Ly became one of the first people in Vietnam to own a yacht when she purchased a top-of-the-line 630 Ferretti for US$4.4 million (S$5.9 million) in 2016. It is docked by the Saigon River and used to take her family out on vacations and holidays. She has also used it to showcase her diamond brand’s latest collections.

Ferretti yachts includes entertainment suites, dining rooms, guest rooms, a bar as well as an outdoor BBQ area. Ly Nha Ky has an international firm in Hong Kong operating and maintaining her yacht, including a small crew of four people who have extensive experience serving on 5-star international cruise ships.

In addition to her yacht, she also owns a US$1.8 million (S$2.42 million) Rolls-Royce Ghost and has a chauffeur drive her around the city for events and business meetings.

Ly Nha Ky is also a head-turner at media events, where she regularly wears stunning creations from haute couture designers such as Georges Hobeika, Alexis Mabille and Alexander McQueen.

She complements her outfits with high-end jewellery brands from Grisogono, Paolo Piovan, Crivelli Gioielli, which she distributes in Vietnam.

In 2013, Ly launched her diamond brand with her initials Lynk at her luxurious showroom located in the prestigious central District 1(HCMC), solidifying her presence as the “diamond giant” in Vietnam.

Her ostentatious shopping habits have also drawn public scrutiny. If she likes a particular collection from a brand, she will buy all colours for one style.

However, she insists that she is not dependent on buying branded goods, saying that she doesn’t value them very much and only uses them to serve her needs.

Now if this showbiz queen ever decides to move to Singapore, she’ll definitely give Jamie Chua a run for her money.

Would you live in Ly Nha Ky’s mansion? Let us know in the comments section below or on our Facebook post.

If you found this article helpful, check out Crazy Rich Asians: 5 Singapore landed homes fit for the 1% and Exclusive homes perched atop five-star hotels.