If you were to ask any local to name the most notorious part of Singapore, there’s a pretty decent chance Yishun would be mentioned more than once. This comes as no surprise, considering the dozens of bizarre events that keep occurring in the neighbourhood.

On the opposite end of the spectrum, we have a place not many Singaporeans have heard of, much less visited. Let us introduce Yew Tee, Yishun’s wallflower cousin who is situated all the way at the north-western part of the country.

The only time anyone ever talks about Yew Tee is to lament how boring it is, with a common consensus that the area is nothing more than a long-forgotten ghost town tucked away deep in some far, isolated corner of Singapore.

Here’s a fun fact: The name Yew Tee in itself translates to oil pond in Teochew dialect. During the Japanese Occupation, the Japanese used the village in Yew Tee as an oil storage facility.

Even though this isolated neighbourhood may not be quite at the level of its infamous cousin Yishun, there have been some noteworthy incidents that happened in Yew Tee.

While there may not be actual gangs roaming the neighbourhood and fighting to mark their territory, the same cannot be said about the wildlife.

In November 2020, a romp of otters was seen having an intense “turf war” against a pack of stray dogs in the Pang Sua canal. According to a Yew Tee resident, the troublemaking otters were newcomers encroaching on the stray pooches’ territory, perhaps attracted by the abundance of fish in the canal.

After a few empty threats and charges from each side, no blows were exchanged, and the two groups dispersed peacefully.

While Yew Tee doesn’t come close to sharing the same reputation of being a crime-ridden neighbourhood unlike Yishun, it isn’t completely crime-free either.

In 2018, a man stole S$35,000 worth of gold from a jewellery store in Yew Tee Square. The perpetrator had been gambling and lost S$50,000, which he was unable to pay. He went to the jewellery store and tried on several gold chains under the pretext of purchasing them.

As soon as he saw the opportunity to flee, he did just that, sprinting out of the shop with the 4 articles of jewellery on him.

He has since been arrested and sentenced to five months’ imprisonment. 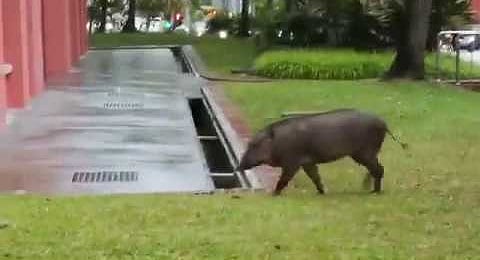 There have been countless articles and social media posts showing wild boars casually roaming through the housing estates in Yew Tee, brazenly rummaging through trash even in broad daylight.

It is believed that they live in the forested area around the army camps nearby. These animals not only create a mess whenever they rummage through garbage, they also pose a potential threat, especially with young children in the neighbourhood.

Despite this, most residents seem to still be in awe of these creatures, gather in droves and taking pictures and videos whenever they spot a wild boar.

Despite its reputation (or lack thereof), there are a handful of noteworthy places in this ulu town.

Most Singaporean men shudder upon hearing the initials ’DB’, but not many know that the SAF Detention Barracks is located in Yew Tee.

While the military prison is obviously not a place that you can or would want to visit, it is definitely a talking point, especially for those who have friends and family residing in Yew Tee.

There have been comments online joking about petitioning to rename Yew Tee MRT station to Kranji Camp MRT station. Mowbray Camp and the Police Dog K9 Unit is also located together with the rest of the camps.

If you’re a Yew Tee resident wanting to furnish your home, you can look beyond mass-produced flat-pack furniture from Ikea or Taobao.

There are at least 20 furniture warehouses located right in your backyard at Sungei Kadut, so that you can take your pick from a vast selection of unique pieces at affordable prices.

While you’re in Sungei Kadut browsing for furniture, don’t miss the opportunity to pop by Gain City. This megastore is a whopping 11 storeys tall, taking home the title of Singapore’s largest consumer electronics and IT retail store.

Be prepared to spend your entire day at this one-stop destination for home renovation – it even has various shopping and dining options within the building so you won’t ever run out of things to do.

You can get there by taking the free shuttle bus service from the bus stop opposite Lot One Shoppers’ Mall in Choa Chu Kang or the bus stop Yew Tee MRT. Those who drive will enjoy a 6-hour free parking, so they can shop to their heart’s content.

In the event that you do decide to venture out to the Wild Wild North-West, be sure to check out Stickies, a secret bar tucked away in the industrial estate of Sungei Kadut. The restaurant is spacious with a laid-back vibe that’s perfect for a cosy catchup with friends, with affordable drinks and unique bar snacks.

You can get there by taking the free shuttle from Yew Tee MRT.

Yew Tee has fallen completely off the radar, and with good reason – we were hard pressed to find something even remotely interesting about the neighbourhood.

While the online sentiments about how boring Yew Tee is might hold some water, don’t let this put you off from getting to know the neighbourhood. After all, no news is good news. You don’t want to live in an area that wouldn’t be out of place in a horror movie (ie: Yishun).

A large part of the residents are young families, with seven primary and secondary schools in the vicinity. You can rest assured that your child has a safe environment to grow up in and that their education needs are well catered to.

Yew Tee also offers a nice respite from the hustle and bustle you might find in other neighbourhoods. Take a leisurely stroll along the Pang Sua park connector that links to various parks in Yew Tee, Choa Chu Kang and Bukit Panjang. If a relaxed, serene pace of life sounds good to you, Yew Tee is right up your alley.

There are also upcoming developments which might make it more attractive to potential residents and boost the area’s value. Watch this video to learn more about what’s next for the residents of Yew Tee.

In 2019, plans were announced to build Singapore’s second vertical ‘kampung’ beside Yew Tee MRT. This integrated hub modelled after the award-winning Kampung Admiralty project will consist of a community club, childcare services, HDB block, hawker centre, polyclinic as well as a kidney dialysis centre,. It is expected to be completed in the first half of 2027.

Another exciting development is the opening of the new Sungei Kadut MRT Station, located between the existing Kranji and Yew Tee MRT stations on the North-South Line (NSL).

In addition, the Downtown Line will be extended from Bukit Panjang to serve Sungei Kadut station, unlocking a whole new level of connectivity for residents in Yew Tee. This project can be expected to be ready by mid-2030s.

Would you live in Yew Tee? Let us know in the comments section below or on our Facebook post.

If you found this article helpful, 99.co recommends Rent vs buy a property: here’s what Singaporean millennials prefer and Renting vs buying property in Singapore: Which is better for you?