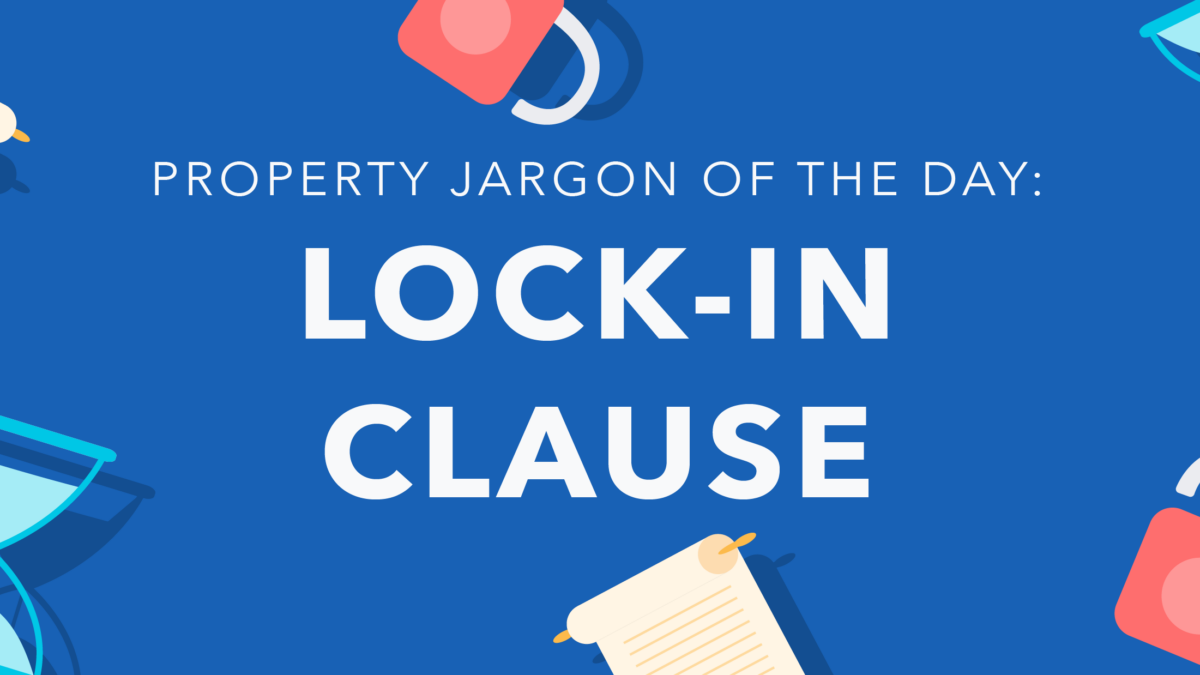 Every day, 99.co picks a piece of property jargon to explain it. Today we look at the lock-in clause, common to many bank loans.

What is the Lock-In Clause?

The lock-in clause (often just referred to as a lock-in) imposes a penalty for refinancing your home loan. With most banks, the penalty is 1.5% of the undisbursed loan amount. For example:

(This is almost always the same across all banks – but check to be sure, as some may have even more fees on top of this!)

A lock-in period usually lasts between one to five years. One important thing to note is that, if you take a fixed rate loan, you are almost always considered locked-in during the fixed rate period. So for a three year fixed-rate loan, for example, you are also locked-in for all three years.

Can you save money by bearing the lock-in penalty, and refinancing anyway?

It’s almost impossible. 99.9% of the time, you will lose more money from breaking the lock-in than you would save by refinancing.

If you accept a lock-in clause, you’ll have to bear with it for the lock-in period; even if the rates start getting dangerously high just after the first year. This is why it’s important to consult an expert, like a a mortgage broker, before accepting such loan packages.

Why would anyone agree to a lock-in clause?

Loan packages with a lock-in clause tend to be cheaper, often by around 0.3% or so. If you’re not intending to refinance within the specified period anyway, there’s no reason not to settle for a cheaper deal.

For example, if you’re not going to refinance until the fourth year (which is when the interest rate becomes substantially higher), then a three-year lock-in is more or less meaningless.

Since most borrowers are worried about being stuck with a high interest loan, some banks offer conditions to mitigate their lock-in. The two most common ones are a removal of prepayment penalties, and a waiver for repricing.

Regarding prepayment penalties, most banks charge a penalty of 1.5% on the loan amount redeemed. For example, if you want to “accelerate” your home loan repayment with a one-shot payment S$100,000, you would be charged a penalty of S$1,500.

Some banks, however, waive prepayment penalties during the lock-in period. This is significant, because you can mitigate the effect of rising interest rates with prepayments. By paying more of your home loan than you need to, you effectively lower the total amount of interest you pay over time. This can be almost as good as refinancing into a cheaper package.

(The maths involved would send a veteran accountant into a coma though, so get help in working out the ideal amount to prepay. A mortgage broker or banker can help).

Note, however, that there are usually limits on how much you’re allowed to prepay without a penalty. Most banks will only allow partial prepayment (e.g. you can prepay only up to S$150,000 without penalty, but anything more than that incurs the usual costs).

The exception to this is if the bank provides a full waiver for sale of property. This means that you can pay off the entire loan without incurring the prepayment/ lock-in penalties, if you are selling the property. This is a good option for borrowers who have intend to sell, sometime during the lock-in period.

(Remember that a fixed-rate loan is by default a lock-in. You could thus take a fixed rate loan in the years leading up to a sale, to prevent any interest rate shocks. When you do sell within the lock-in period, you will escape the 1.5% penalty).

Second, some banks will waive the lock-in penalty for repricing

This is when you switch from one loan package, to another loan package from the same bank. Note that it’s different from refinancing, in that you can switch to a loan from another bank altogether.

This may or may not turn out to be a money saver – it’s a shot in the dark, as you don’t know if the bank will have cheaper packages for you to reprice into. Nonetheless, it’s nice to have it around as an option.

It’s best not to see lock-ins as a positive or negative, but as a neutral feature

A lock-in clause shouldn’t put you off if it’s not relevant. Think it through: how often do you really need to refinance (or are willing to go through that annoying process)?

If you’re only doing it once a decade (or even never) then the lock-in is irrelevant. Take it if it happens to be the best rate.

Any bits of property jargon you would like to learn more about? Let us know in the comments section below.