The name Dyson has made news again in Singapore property: Just a little more than one year after purchasing the largest penthouse in the country at Wallich Residence for a record $73.8 million, the Dysons are now selling the Core Central Region (CCR) property at $62 million—incurring a $11.8 million loss, according to a Business Times report.

Measuring 21,108 square feet across three stories, the mega-penthouse was purchased in July 2019 and held under Dyson’s billionaire founder James Dyson’s wife, Deirdre. Later that year, Dyson announced it will set up its global headquarters in Singapore, and James Dyson also purchased a sleek $45 million Good Class Bungalows (GCB) at the CCR location of Bukit Timah.

But things haven’t really looked good for Dyson after his real estate forays.

After the high-profile property purchases, Dyson dropped the bombshell that the company would scrap a multi-billion project to build electric vehicles, including a plan to build its first electric car plant in Singapore by 2021.

Then, this year, Covid-19 hit. While the pandemic had made some of the world’s richest, such as Amazon founder Jeff Bezos and Tesla founder Elon Musk, even richer, many who haven’t been able to capitalise on Covid-19 trends, or are impacted by the lockdown-driven economic recession, are decidedly worse off.

And that includes Dyson, which announced in July 2020 that it was cutting 900 jobs worldwide out of a total of 14,000 employed, including 16 out of 1,200 in Singapore. Even though it’s just a fraction, the job cuts hint at challenging times for the company, which had to shut its stores in United Kingdom during the pandemic lockdown.

The thing is: Even though there are probably a number of personal factors leading to the sale of a home at a loss, there are bound to be naysayers who might look at Dyson’s penthouse sale and argue that CCR condos in Singapore are overhyped, or carry a high risk of loss.

But here are three truths that can offer buyers a more accurate perspective of the prime property market in Singapore:

Truth #1: CCR or not, property is usually always unprofitable in the short-term in Singapore

Why? Because our government wants it that way.

In selling the Wallich Residence mega-penthouse between the first and second year of the purchase date, Dyson had to pay a Seller’s Stamp Duty (SSD) of nearly $5 million (8% on the sale price of $62 million). The SSD was introduced in 2010 to deter property flipping, which if allowed to happen might cause a real estate bubble of epic proportions.

That means, to break-even on a sale right now, Dyson would’ve had to sell the penthouse for $85.5 million, which is an $11.7 million gross profit and a close to 16% more than the original purchase price.

To achieve profitability by capital appreciation alone (without rental yield), buyers and investors must set their sights over a longer time horizon. For the Core Central Region (CCR) of Singapore where Wallich Residence is located, condo per square foot (psf) prices have seen an average annualised growth rate of 14.8% from the beginning of 2005 to the end of Q3 2020, for a total increase of 147.7%.

Looking at 99-year leasehold condos in the CCR, which include Wallich Residence, the average annualised growth rate for psf prices is even higher, at 16.1%, translating to a total increase of 169.1%.

To get a more accurate historical representation of capital appreciation, we narrowed down the condos analysed to those built from 2000 to 2004. From 2005 to date, the average annualised growth rate for CCR condo psf price is a very respectable 11.0% for all tenures (total 84.0% growth) and 11.2% for 99-year leasehold condos only (total 87.9% growth), as the chart below shows:

Given the figures, the recommended holding period for James Dyson for the Wallich Residence mega-penthouse would’ve been at least three years, which would clear him of any SSD obligations.

For capital appreciation, however, it’s advisable that the buyer continue to hold the property after three years, while monitoring market trends and assessing opportunities for selling the property as part of an asset progression strategy.

At first glance, it would seem that in the past 16 or so years, the growth in value of properties in the city fringe Rest of Central Region (RCR) and Outside Central Region (OCR) have outperformed that of a CCR property if you look at things in percentage terms. Take for instance the price performance of condos built from 2000 to 2004:

Even though CCR condos did not have the highest percentage gain in terms of average prices, in terms of absolute gain in value CCR properties comes out tops. This is important for high-net worth investors who not only want a prestigeous address in a prime location, but also do not wish to manage too many properties under their belt, or be subject to possible higher taxation of owning multiple smaller properties rather than one large unit:

It must be said that the robust performance of the CCR in the past 10 to 15 years relative to other regions isn’t necessarily indicative of future performance. There are factors such as work-from-home and decentralisation of the CBD that could provide formidable headwinds to CCR property price growth.

On the other hand, infrastructure improvements that have benefited the RCR and OCR areas in the past 10-15 years may come to the CCR in the next decade and further boost property value. For instance, the upcoming Thomson-East Coast Line (TEL) and the Circle Line extension, which would greatly improve connectivity within CCR, may create as much uplift for CCR condo prices as those in the RCR and OCR.

But perhaps the greatest catalyst for CCR price growth is the Urban Redevelopment Authority’s incentives to encourage mixed-used developments and redevelopments within the CBD. This, together with the future Greater Southern Waterfront mega project, could make Singapore’s prime city area a more attractive environment to live in, boosting demand and property prices in the area.

When the government raised Additional Buyer’s Stamp Duty (ABSD) in July 2018 to “keep property prices aligned with fundamentals”, many were predicting a serious dampening in demand for higher priced properties in the CCR, especially among foreigners who must pay a 20% ABSD, up from 15% previously.

Although the number of property transactions in the CCR did fall by about 7.2% in 2019 compared to 2018, purchases of CCR condo units by foreigners actually increased marginally, from 470 to 473 units.

Why this is significant is because the CCR typically gets the highest proportion of foreign buyers out of the three regions in Singapore. Foreigners bought 11.6% of CCR condo units in Q3 2019, as opposed to just 3.2% for RCR and 1.7% for OCR condo units.

It would seem that foreign buyers just aren’t put off by the increase in ABSD. Their argument might be that, if the Singapore government hadn’t increased ABSD by 5%, higher demand would have driven up prices by the same percentage anyway, if not more.

However, what ABSD didn’t do, Covid-19 appears to have done. In first three quarters of 2020, the number of CCR condo units bought by foreigners decreased 19.6% compared to the same period in 2019.

High net worth buyers have also been missing in action during the year of the Covid-19 pandemic. Likely affected by travel restrictions, only 47 condo units above $5 million were purchased by foreigners in the first three quarters of 2020, compared to 143 units they bought from Q1-Q3 2019.

With the dearth of foreign buyers during the Covid-19 pandemic, it is inevitable that CCR condos, especially those in the luxury bracket, could experience some price weakness, which is bad news for owners and those who need to sell in a jiffy.

But, the current situation also presents one of the best opportunities to by a home at Singapore’s most coveted locations, at discounted prices. In fact, most of us are so transfixed at Dyson’s property being sold for a $11.8 million loss, that we overlook the fact that the guy who is buying it might have gotten a really good deal.

According to Bloomberg, the buyer of the Wallich Residence mega-penthouse is said to be Leo Koguan—an Indonesian-born, US-citizen tycoon with $1.4 billion net worth. As a US citizen, Koguan will also pay no ABSD because of a free trade agreement that accords him the same Stamp Duty requirements as a Singapore Citizen.

One thing’s for sure, the sale of the Dyson penthouse won’t be the last significant discount or fire sale we’ll be seeing in the CCR. Covid-19 is a period of upheaval—the shuffling of a deck of cards that will see more Dysons willing to part with their property for less than what they paid for.

Observing the market with solid data, it’s important to bear in mind that the short-term price weakness due to Covid-19 isn’t indicative of a long-term downtrend for CCR properties.

Far from being a warning sign for CCR properties, Dyson’s $11.8 million loss could be one of the best ‘buy signals’ for CCR properties right now, targeted at the savvy property buyer sniffing out long-term real estate assets at a discount.

For Singaporeans in particular, this is a rare window of opportunity to own a prime location condo before wealthy foreign buyers come pouring in again.

Want to follow in Leo Koguan’s footsteps? Check out this article: How to Hunt for Fire Sale Properties in a Recession (other than auctions)

What’s your take on the Dyson penthouse sale? Share your thoughts with us in the comments below! 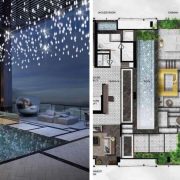 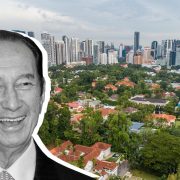 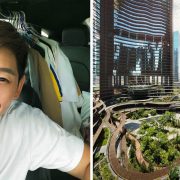 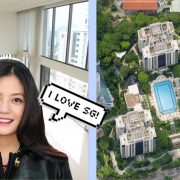