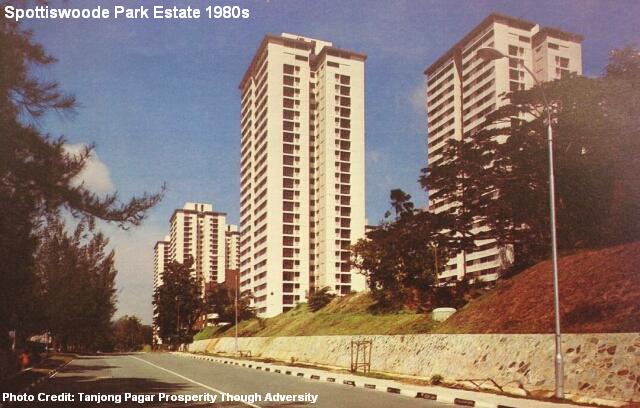 After our JTC Jurong flats from 1977 story, a reader wrote to us requesting that we look into the history behind a cluster of HDB flats at Spottiswoode Park Road.

What’s interesting is that while there are 9 similar-looking “HDB” blocks (blocks 101-110) in that cluster (block 108 is a multi-storey carpark), not all of them are public – some are actually private. Confused much?

To better understand how this happened, we need to backtrack to the early 1970s.

While most of the buyers were PSA employees, some were employees of other statutory bodies, tertiary institutions, and Temasek Holdings. Based on HDB info, the leases of these blocks started on 1 April 1973.

One can understand the attractiveness of these residential blocks as they are just within walking distance to the former Tanjong Pagar KTM (Keretapi Tanah Melayu) railway station (and soon, the new Cantonment MRT station on the Circle Line).

Between 1986 and 2000, the former Gan Eng Seng secondary school was relocated from Anson Road to the Raeburn Park neighbourhood (it moved to its current Henderson Road premises after).

Each of them (241.5 square metres or 2600 square feet) has four bedrooms, one living room, and a dining room. The bedrooms came with built-in wardrobes and parquet flooring.

At S$46 psf and centrally located, these penthouses are quite a steal by today’s standards.

Unfortunately, when the first 10 penthouses were completed in 1976, “there were no takers,” as quoted by a PSA spokesperson at the time.

“We then decided to retain them for sale only to deserving senior staff as an incentive.”

In a news report in 1978, the Housing Board agreed to help PSA sell the flats to the public. At the time, three out of five blocks there were rented to HDB applicants under a special agreement between the two statutory bodies.

HDB had, in principle, bought these flats from the PSA for sale under the homeownership scheme. Each of these 5-room flats was being sold for about S$46,000 at the time and successful applicants can use their Central Provident Fund (CPF) savings.

The move came with some controversy. PSA staff, who paid S$57,500 for the 5-roomers, complained about the price difference. Unlike public buyers, they had to take up housing loans to pay for their flats.

“We fail to understand why the PSA had been selling these flats to its own employees and other public and civil servants at such high cost compared with what it could sell to HDB,” they wrote.

In their complaint, the owners also questioned if Spottiswoode Park would be managed by the PSA or HDB, or both, with some strongly worded text:

“Could the PSA sit back and allow its own employees and other public and civil servants to feel that they have been done? Such action in a staff housing project may not be expected even from a profit-oriented business organisation.”

It is understood that all 9 blocks came under HDB management by 1 October 1979. Between 2002 and 2007, all nine blocks underwent lift upgrading programmes.

So it comes to reason (and confusion) when residents living in these privatised blocks want clarity from HDB on how they can go about with a collective sale. With 50+ years left on their leases, the urgency is warranted.

It’s a tricky situation, because there are five other neighbouring public blocks that look the same, both inside and out – including the same penthouses – um, executive flats – on their top floors.

Furthermore, if we compare transaction data between the 5 public blocks and 4 private blocks, we can clearly see differences in their psf prices.

While they are smaller, 3-bedroom apartments, they share an open-air carpark while the rest share a multi-storey carpark. They are also closer to the Kampong Bahru and Blair Road shophouses.

As for the five public blocks, their average psf price has been uniform – averaging at between S$500-S$600 psf as of 2021. We also figured that most of the transactions have been for the 5-room flats and not the executive flats.

Also, it would be interesting to monitor prices of flats in blocks 109 and 110 when the Cantonment MRT station is operational in 2025/2026 (as they’re the closest).

While it’s anybody’s guess as to the future split-identity of these nine Spottiswoode Park HDB flats (and subsequent plans by their respective residents), it’s safe to know that every time you drive past them along the AYE (towards Keppel Road exit), you’ll now know the history of how they’ve come to be. Are you living in one of the Spottiswoode Park HDB flats? Let us know your thoughts in the comments section below or on our Facebook post.

If you found this article helpful, check out Reddit users debate S$30k 5-room Jurong flat from 1977 versus salary increases over the years and Where to find executive maisonettes in Singapore.