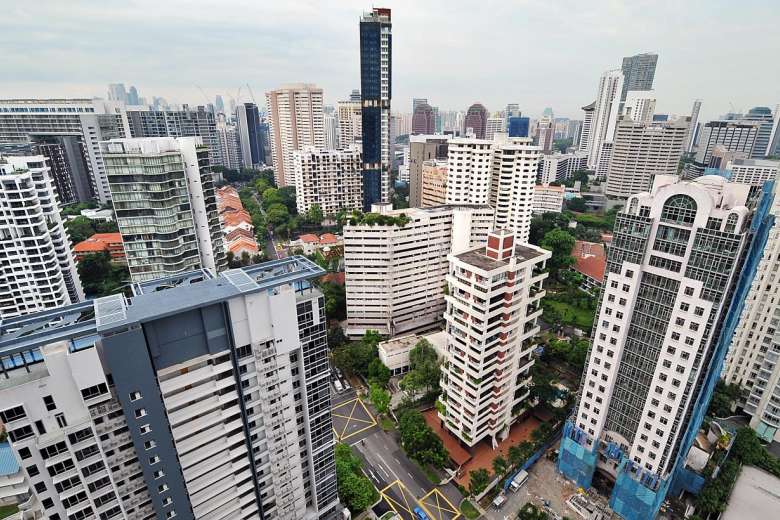 They say beauty is in the eye of the beholder. But every time you hear that phrase being used, it’s invariably an excuse for something being ugly. Well, the property agents might have to use this phrase a lot when dealing with some of these Singapore condos. Don’t get us wrong, these condos have lots of attributes going for them: a great location, incredible amenities, good price, etc. It’s just… beauty is in the eyes of the beholder.

This is the kind of design creativity you attract when you call your development “The Linear.”

The name is honest, because this has got to be the most unimaginative structure ever conceived. The Linear is a thick straight line, and nothing more. If I had to guess at the inspiration, I’d say it has the same aesthetic appeal as a trench in World War I. Just look at that straight block – if your child built something like this as a Lego project, she’d fail kindergarten for lack of effort.

That said, this testament to uncreative thinking has its plus points. The Linear is situated in the popular Upper Bukit Timah district (close to nature reserves) and within walking distance Bukit Panjang MRT on the Downtown Line. It’s got a rare 999 year lease, and on 99.co is about $850 to $900 psf. There are 221 units, and the entire development is only 12 years old.

All the creative effort was apparently reserved for the interior, which has a sort of cosy yet modern feel.

If there’s a reason not to give peace a chance, the facade of this mixed-use development is it.

We have featured Peace Mansion before, as a dumpy-looking place that nonetheless has huge value (en-bloc attempts at $680 million have been made for it).

From the exterior, the 42-year-old Peace Mansion looks like something the Soviet Union built in a time of severe shortages. They say all buildings communicate something to the viewer, and this one is clearly an articulation of why we need anti-depressants. Complementing its Cold War charm is its adjoining mall, Peace Centre, with its thick cluster of dubious KTVs and their flickering, half malfunctioned neon signs all over its facade.

Although run down, this is an incredibly well located condo with access to six MRT stations including Dhoby Ghaut and Little India. It sits along Sophia Road, minutes away from the heart of the city. That’s a location so desirable, three rounds of en-bloc attempts have failed to pull owners away from it.

Peace Mansion is a 99-year leasehold condo, which had its TOP in 1976. Average unit prices, if you can even get a hold of one, is a steal at around $600 per square foot.

I don’t care how famous the architect is (Daniel Libeskind), or how upmarket it is. This entire development looks like it was hit by a meteor, or designed during a time of severe ruler shortages.

The curvy, organic shapes of these buildings are (as I’m made to understand) in relation to their reflection in the water. They look like a distorted reflection of towers in the water. I guess that’s cool once it’s explained – but if you didn’t know that, you’d wonder if this was a case where the architect punched the contractor after seeing the end product.

This development was awarded the FIABCI Prix d’ Excellence Awards 2013, because ridiculousness in architecture is like improv jazz. Loads of people pretend to like it.

Reflections at Keppel Bay is a luxury property, and it even comes with complimentary membership at the nearby Marina. At around $1,600 to $2,000 per square foot, some of the residents can undoubtedly afford a yacht. There are 1,129 units, and its 99 year lease started in 2013.

I don’t know what you call the shade of green they used on this building, but I’m thinking it’s along the lines of mould or algae. If your jade is actually this colour, call the police because you got scammed.

But the worst aesthetic issue with this building are the two holes in the middle. Look at them for a minute, I guarantee they’ll start to irritate you. (Well, it’s actually a deliberate design for feng shui reasons.)

That said, this is a development with a remarkable location. The Jade is a 99 year leasehold condo, with 280 units. It was completed in 2004, and goes for around $950 to $1,100 per square foot. It’s location at the heart of Bukit Batok Central means it’s easily accessible by bus and MRT. It also means The Jade is close to amenities like cinemas and eateries, and the retail hotspots like West Mall. The Jade is also close to the upcoming CBD in Jurong, so maybe the feng shui masters were right after all.

You know I said The Linear was bland? The Parc somehow manages to take that same problem, and multiply it by 10. The blockish, undifferentiated towers look like someone tried to save money by having one blueprint drawn up, and then replacing the architect with a photocopier.

The colours don’t help either. HDB flats are often criticised for being too uniform and drab, but notice how the nearby flats are actually more vibrant in colour and contrast. For The Parc, the only feature that seems to stand out is the squares on the roof, which is probably attempt to draw your eyes away from the

But dull or not, this West side property is actually one of the best places to live in Clementi. It’s situated within walking distance to Clementi MRT station (and hence by default, is also close to Clementi Mall.) The West Coast Drive Market is also nearby, forming a cosy lifestyle enclave. It’s also a stone’s throw away from the National University of Singapore and a clutch of good schools. Most importantly, it’s freehold.

If you live inside ugly condos, you’re not the one staring at the facade. In some sense, a pretty facade is more a chance for an architect to show off, or to ramp up the price (you’re braced for a higher price when something is prettier). Also, you can’t really tell whether a condo looks ugly after the sun sets.

But stick to the basic realities — convenience, location, and affordability. The exterior of ugly condos can come last on the list.

Know any more valuable but ugly Singapore condos? Share them with us in the comments section or on our Facebook community page.

If you found this article helpful, 99.co recommends Has Clementi become prime real estate in Singapore? and 5 Most Insta-worthy Condos in Singapore [2018 edition]