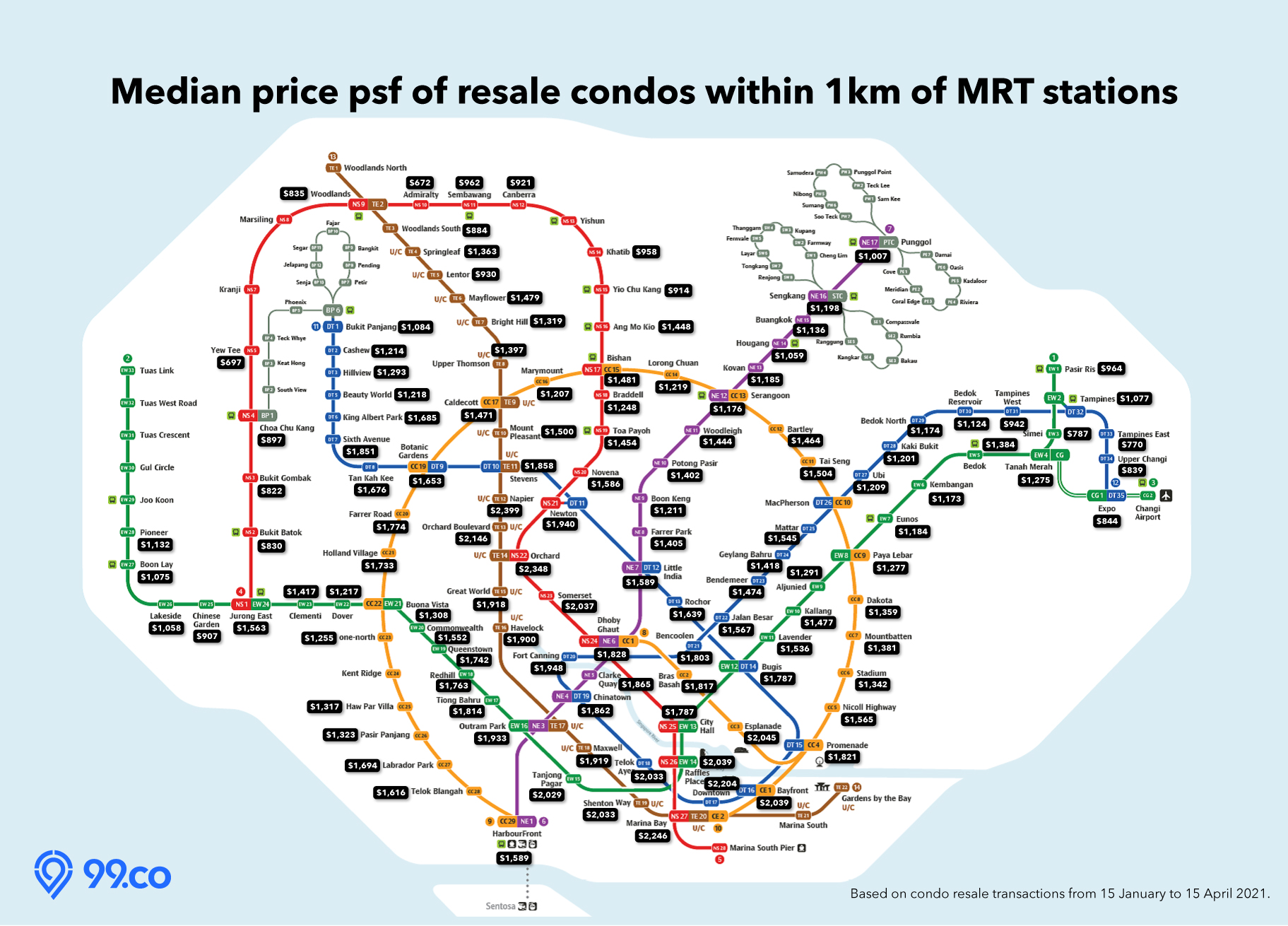 It’s understood that centrally-located properties, especially those in the Core Central Region (CCR), are the most expensive in Singapore. A general rule-of-thumb for residential property purchase is that the closer a property is to the city centre, the higher the value it commands.

Looking at the condo resale transactions in March 2021, the most expensive transaction was in EDEN, with each unit selling for S$18.3 million. Its nearest MRT stations are Orchard and Newtown.

Here’s what we found.

Price psf is the highest in areas closest to the CBD

Condos closest to the MRT stations in the CBD area, such as Raffles Place, Tanjong Pagar, Marina Bay, Bayfront, Esplanade and Downtown, command the highest value. They all have a median price psf of at least S$2,000.

At the same time, condos near Orchard MRT have a median price psf of S$2,348. Although Orchard is not as close to the CBD as areas like Raffles Place, it’s a prime location and houses the billionaire’s belt.

This supports the claim that homes in the city centre command the highest value.

Price psf decreases the further the property is from the CBD, but only to a certain extent

Generally, we can see this trend happening across all MRT lines.

When it comes to residential properties, Queenstown is one of the most popular locations. So it’s no surprise that condos near Queenstown MRT have a median price psf of S$1,742. This is considered pretty high, but not as high as those near Tanjong Pagar MRT, which are closer to the CBD.

As for condos located around the end of the line, such as those near Boon Lay MRT and Pasir Ris MRT, the median prices psf are even lower at S$1,075 and S$964, respectively.

Further up north at Admiralty, the price psf is even lower at S$672. In fact, compared to those along the North South Line, condos near Admiralty MRT have the lowest median price psf.

But the main point still stands — that homes located further from the CBD generally fetch a lower price.

Similarly, the median price psf of resale condos along the North East Line generally decreases as you move up northeast. Prices are the highest around the CBD, in locations such as Outram Park, Chinatown and Clarke Quay within the S$1,800 to S$2,000 range.

On the other hand, there are city fringe areas along Circle Line with an even higher price psf, namely Botanic Gardens, Farrer Road and Holland Village. But this is hardly surprising since they’re in the prime district of Bukit Timah.

Following the rule-of-thumb, the price psf of resale condos are the highest near Marina Bay MRT, Esplanade MRT and Bayfront MRT, which are all in the CBD. The median price psf in these areas are at least S$2,000.

In fact, as the MRT stations on this line circle (pun intended) around the city centre, the median price psf of condos are generally the highest among those near MRT stations.

Likewise, the median price psf is on the higher end for condos near Telok Ayer MRT, Downtown MRT and Bayfront MRT, given their proximity to the CBD.

Moving away from the city centre, areas like Stevens and Sixth Avenue have a pretty high price psf, given their location in the prime district 10.

And as seen in other MRT lines, the lowest price psf can be found towards the end of the line, such as Bukit Panjang and Expo.

Despite the line being fully operational in 2024, resale transactions of condos near the Thomson-East Coast Line MRT stations are comparable to those along other lines. For instance, in central locations such as Shenton Way, Napier and Orchard Boulevard, the median price psf is above S$2,000.

Similarly, in prime locations further from the city centre, such as Mount Pleasant and Katong Park, the price psf hovers within the range of S$1,500 to S$1,700. Towards either end of the line at Woodlands and Sungei Bedok, the price psf is around S$800.

All these numbers prove that as the property is located further away from the city centre, the price psf declines.

However, as we take a closer look at the data, we find a few exceptions to this rule.

Condos near Jurong East MRT have a median price psf of S$1,563. In the neighbouring Clementi, the price psf is S$1,417. Despite their suburban location, their median price psf are comparable to those in city fringe locations, such as Commonwealth.

The high property value in Jurong East and Clementi can be attributed to the plans for Jurong to be a second CBD.

Over the next 20 to 30 years, Jurong Lake District will be developed with commercial, housing and tourism developments. The area is also expected to have more than 100,000 new jobs in industries such as maritime, infrastructure and technology. All these plans may have driven up the property value here.

The price psf at Bedok is not as pronounced as that of Jurong East and Clementi. But with a median price psf of S$1,384, condos near Bedok MRT are comparable to those in the RCR, like Kallang.

This can be due to its mature estate status, where residents have easy access to plenty of amenities and good food. It’s also close to recreational options such as East Coast Park, and shopping malls and Bedok Town Centre.

At the same time, proximity to the CBD isn’t the only factor driving up property prices. Other factors such as future plans and availability of amenities, also drive up demand and price of homes, as we see in Jurong East, Clementi and Bedok.

If you found this article helpful, 99.co recommends Rejuvenating the Core Central Region: URA’s Master Plans for Orchard and Novena and Condo rents decline in 2020, with one notable exception.