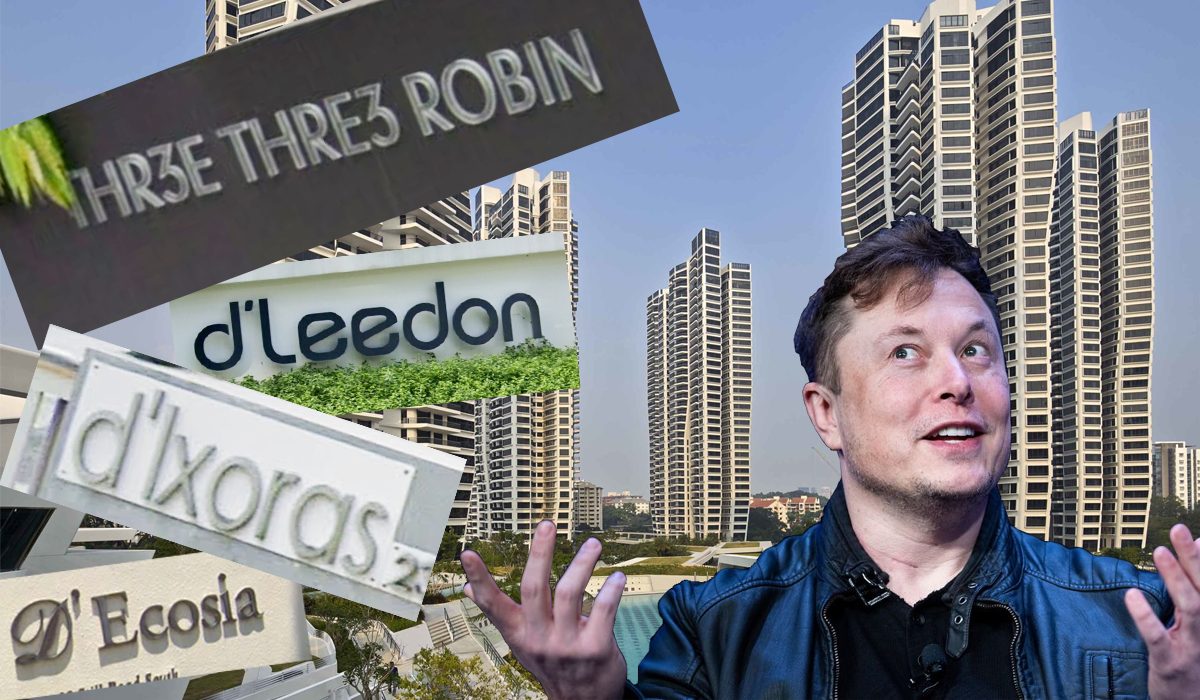 Some trends we can all get behind—like flattening the curve, or working from home, or the second coming of bubble tea. Other trends, like baby names you can’t pronounce, should be stamped out with with as much fervour as annihilating Covid-19. It turns out that like human offspring, we’ve also been giving our condominiums massively cringey names, on top of those that are just plain basic/boring/repetitive/overused. Here are the condo naming trends developers need to stop following now, unless they’re trying to attract Elon Musk to buy:

1. No more Parc anything, please

Let’s start off with some names for recent condos with the name ‘Parc’ in it.

Parc is French for park, and France is Europe’s cultural heart and all; but just putting a French word in front of everything about as sophisticated and clever as gluing high heels to a pair of Crocs.

There are only two redeeming qualities about this trend, which still don’t excuse it:

(1) It’s one of the few French words that we definitely won’t mispronounce, and

(2) it makes it easy to figure out when the condo was launched; because apart from The Parc (which got its TOP a decade ago) and Parc Oasis (the very first Parc that was built in the 90s), this is a fairly recent trend. In future, when you see “Parc” anything, you’ll know it was probably built sometime (ahem) during Covid-19.

Then again, the use of the work Parc actually allows the developers to convey what living in the condo would feel like (i.e. a park-like environment) without fully commiting that it’ll be 100% be a park (with squirrels and safe distancing officers) or insinuating that it’s next to a park, which would be misrepresentation.

Like how X Æ A-12 is preferable to something like David that would imply that the baby is human and not actually an android.

In fact, there are 28 condos in Singapore with “Parc” in their names, yet only nine with “Park”.

(Note: We’re seeing the same overuse phenomenon with the more neutral term ‘Residence/Residences’. We’re sure that the developers of the upcoming Parc Central Residences at Tampines are trolling buyers.)

2. We have more Courts than we have judges

There are 183 condos with Court in their names in Singapore:

Take your first or last name and add “court” to it: whatever you came up with, it was probably considered as a project name by someone at some point. Or it’s actually out there (Google it).

The bizarre thing about this trend is that it never seems to truly die: there will be periods when you hear no new developments with court in their names; but then a few years later, the courts appearing all over again. (The last wave of Court was in the early-to-mid 2000s.)

Let’s put a nail in it shall we? It’s boring. It’s dated. It’s more overdone than a Ramly patty at a questionable pasar malam. Let it rest.

Why do D’developers like to use D’s so much? Is it really that much effort to type two more letters (i.e. the)? Is it because, like Parc, they think it has French charm? Or is D’trend drawn from industries outside d’real estate market; such as interior design, hair salons, and beauty products where D’attempts at classiness are normal?

In any case, adding D’ in front of things doesn’t give them a French touch. It’s more like the French Embassy inviting you over for dinner, and you turn up wearing a beret and carrying several baguettes to show how “in touch” you are with D’French.

But Elon, we still think D’X Æ A-12 would sound better.

This is supposed to follow the De, I think. As in, De La Pretencion, or something like that (unlike some people, I don’t pretend to speak French).

The issue is more or less the same with D’. It’s unnecessary, there’s a sense of trying too hard, and it’s a lazy way to come up with something elegant.

Last we checked, a condo is explicitly not a mansion, being just apartments and all.

Anyway, there are roughly 86 developments with the word “mansion” or “mansions” in their names across Singapore.

The thing is, the luxurious Meyer Mansion, which has a lift for every unit, is actually deserving of the “Mansion” moniker. Not so sure about the rest.

Maybe “mansion” is a Freudian thing; an expression of frustration at the shrinking sizes of our homes. After all, words like Parc and Court also suggest wide open spaces. It could be that developers find that such words could lead to better sales.

Based on the above, I present the most uniquely Singaporean name for a project:

For your consideration, Elon Musk, in case you want to build your own condo.

Half of the name isn’t even in English, and the words that are, are used incorrectly. But I’m willing to bet someone on a developer’s marketing team has all four of those words, on a whiteboard somewhere.

Which condo naming trend annoys you the most? Share it in your comments section below.

If you liked this article, 99.co recommends Why Yishun is Still the Most Terrifying place to live in Singapore and How does a neighbourhood shopping mall die?