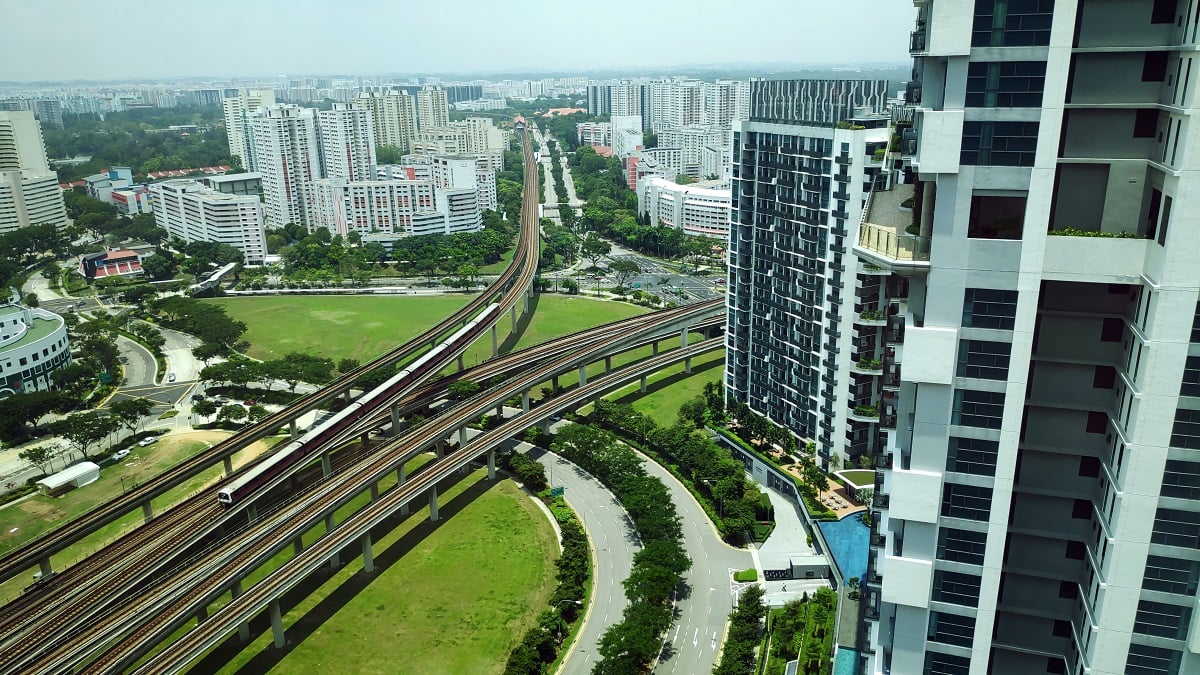 Singaporean home-seekers crave convenience, so integrated condo developments are like a dream come true for many. These are 99-year leasehold condos are built atop key amenities such as a full-sized shopping mall with direct MRT and bus interchange access. Transport, dining, daily necessities and entertainment are literally “under-one-roof”.

Integrated condo developments are also rare; each estate will have, at most, one or two developments that can truly qualify as integrated. Unsurprisingly, such projects subsequently tend to command a significant price premium, compared to standalone private residential developments.

Just how much more do buyers have to pay for a unit in an integrated condo? Let’s look at new launch condos first.

In District 13 (MacPherson, Braddell, Potong Pasir), The Woodleigh Residences features 667 units atop a shopping mall and bus interchange and direct MRT station access. Across the road, the 805-unit Park Colonial right across the road is just a one-minute walk to the MRT station but isn’t integrated with any commercial and transport amenities. Both condos are scheduled for completion in 2022.

Despite their proximity, the integrated The Woodleigh Residences has nonetheless been fetching a 6.2% higher per square foot (psf) price premium versus Park Colonial this year when comparing similar three-bedroom units sized between 900 and 1,000 square feet.

That being said, buyer uptake of units at The Woodleigh Residences has been slow until recently. This is because buyers of mass-market condos remain as price-sensitive as they’ve ever been, with sales only picking up after Park Colonial is nearly sold out (it’s now 99% sold). At the time of writing, about one-third of units at The Woodleigh Residences are still available.

In District 19 (Hougang, Punggol, Sengkang), three-bedroom units at Sengkang Grand Residences currently fetches a price premium of 4.3% and 22.0% on a psf basis compared to similar units Riverfront Residences and The Florence Residences respectively:

In short, as low quantum projects are being snapped up, buyers are naturally gravitating towards the next best alternative: integrated condo developments.

However, a big question mark hangs above these projects: do integrated condos justify their higher prices in the long run?

Located at Paya Lebar Central, the condo commanded a price premium exceeding 20% versus nearby non-integrated condo developments at the time of launch in 2017.

How about rental yield? At an average rent of $3,422 in 2021, the gross rental yield for two-bedroom units at Park Place Residences ranges from 3% to 3.4% based on transacted prices in the first two years of its launch.

For TRE Residences, the average rent for its two-bedder units is $2,690 in 2021. Landlords for these units are getting a gross rental yield of around 3.2% to 3.5% which is slightly better than Park Place Residences. (TRE Residences is a residential-only development that is a three-minute walk to Aljunied MRT station.)

For Sims Urban Oasis, the average rent for its two-bedder units is $2,649 in 2021. Landlords for these units are getting a decent gross rental yield of around 3.3% to 3.4%. (Sims Urban Oasis is a six-minute walk to Aljunied MRT station.)

Because these are further out from the city, it’s reasonable to suggest that there is a bigger difference in perceived value between integrated and non-integrated condo projects.

Now, this is a shocker, while the integrated North Park Residences is netting its first owners impressive profits after just six years, Nine Residences managed to go against the broader trend of condo price increases to register a 4.5% decrease in prices.

For Nine Residences, the average rent for its two-bedder units is $2,295 in 2021. Landlords for these units are getting a gross rental yield of around 2.8% to 3.1%. (Nine Residences is a 9-minute bus ride to Yishun MRT station, which North Park Residences are directly connected to.)

The above example goes to show that, while new launch integrated condo developments might not exhibit any additional advantage in terms of capital appreciation and rental yield in the short run, it’s possible for buyers to discern a good deal by looking more closely at the price premium to see if a particular project is possibly selling below market value.

At the same time, the facilities and scale of the condo development are also influential factors behind price performance. Both Sims Urban Oasis (1,024 units) and North Park Residences (920 units) likely saw greater capital appreciation due to their status as large-scale projects with facilities that are more attractive than condos with smaller-sized plots.

At the same time, the higher transaction volume in these larger projects tends to result in higher valuations and transaction prices over time. In contrast, TRE Residences and Nine Residences have 250 and 186 units respectively.

So, when it comes to condo price appreciation over the short term, the size of the condo project and the facilities it has mattered as much as, if not more than, whether the condo is part of a mixed-use integrated project.

Launched in 2001 and completed in 2002, the 536-unit Compass Heights in Sengkang is Singapore’s first fully integrated suburban condo development. Connected to the condo is a multi-storey shopping mall, bus interchange, as well as Sengkang MRT and LRT stations.

Back then, buyers had a competing new launch condo in the town to choose from: the 490-unit Rivervale Crest, which is located out of walking distance to the nearest MRT but with a neighbourhood mall (Rivervale Mall) adjoining the condo.

Most of the outperformance of Compass Heights can be attributed to prices having greater resilience during property downcycles. Specifically, psf prices for Compass Heights are currently at about 6.8% below the last peak in 2013 and have been rebounding ever since hitting a low in 2015.

In contrast, psf prices for Rivervale Crest are about 14% below their 2013 peak and are showing more resistance in terms of recovery:

Both condos have full condo facilities, so the availability of facilities and condo size would be a negligible factor in pricing differences between the two developments. Both condos also have adjoining malls, so it’s likely that is integrated with a transport hub is what contributes to the price strength of Compass Heights.

The Centris and The Lakeshore in Jurong

The second oldest integrated suburban condo development in Singapore is The Centris in Jurong. Completed in 2009, the 620-unit condo is directly atop Jurong Point shopping mall and Boon Lay bus interchange, with direct access to Boon Lay MRT station.

Comparing this with the purely residential, 848-unit The Lakeshore condo, which is located near Lakeside MRT station, The Centris has also displayed a superior price-performance and resilience to date:

Finally, to look at how prices perform in the medium-term, let’s consider the 583-unit Bedok Residences, an integrated condo development launched in 2011 and completed in 2015. We’ll compare this with a residential-only condo development in the same town, the 561-unit Waterfront Isle. Like Bedok Residences, Waterfront Isle was launched in 2011 and completed in 2015.

While Bedok Residences comprises an integrated bus interchange, shopping mall and direct access to MRT, Waterfront Isle is a residential-only development that is about a nine-minute walk to the nearest MRT station and six minutes to the nearest supermarket. So there’s definitely a gulf between the two 99-year leasehold developments when it comes to accessibility to amenities.

However, when it comes to price performance, it is Waterfront Isle that exhibited the greater percentage value appreciation over time, especially for buyers who bought in during its 2011 launch. As the two projects were launched at about the same time, the developer for Waterfront Isle priced units significantly lower—about 24% lower on average—compared to units at Bedok Residences.

Another notable observation is that even though Bedok Residences is the more centrally-located development, it’s Waterfront Isle that consistently recorded a higher resale volume (except in 2018). This may prove that resale demand isn’t necessarily higher for integrated condo developments, especially since Waterfront Isle has a major selling point of being next to Bedok Reservoir Park.

At the same time, rental performance (in terms of average psf) also appeared to be more robust for Waterfront Isle, even though it is Bedok Residences that has the higher rental volume. This relative weakness in rent for Bedok Residences is likely due to proportionately greater competition among landlords for tenants.

The lesson is that property investors shouldn’t write off condo projects that aren’t the typical darlings of rental demand, simply because developments like Waterfront Isle, which typically have a higher proportion of own-stay residents, could mean that prospective landlords face less competition when renting out their units.

So, are integrated condos really worth their price premium?

As illustrated by the examples above, there’s no definitive conclusion as to whether an integrated condo development will appreciate better than a standalone residential counterpart. The only clear advantage for integrated condos is their scarcity factor, as there is only a handful of them out of the thousands of condos in Singapore.

Based on our analysis, when considering whether an integrated condo development is a good buy and whether paying the price premium is justified, buyers should carefully weigh the following:

For integrated condos that share the same structure as a public transport amenity, en bloc attempts may also be subject to approval from government bodies, which throws another proverbial spanner into a collective sales exercise. As a result, homeowners of older integrated developments could get ‘stuck’ as the development ages and maintenance costs escalate.

With this in mind, buying an integrated condo development might come across as a decision that prioritises clear and present advantages over positioning for future gain—the property equivalent of “a bird in hand is worth two in the bush”. There may be exceptions, however, as integrated projects like the upcoming Pasir Ris 8 may offer some future upside in the form of the Cross Island Line—a major infrastructural project.

One thing’s for sure: the accessibility and convenience of an integrated condo development will be priced in, be it for a new launch or resale project. And as our island becomes better connected over time with amenities becoming more accessible, we foresee that developers of integrated condo projects will find it increasingly difficult to justify a significant price premium.

Do you agree or disagree? Are integrated condos really worth their price premiums? Let us know in the comments section below or via our Facebook post.

If you found this article helpful, 99.co recommends With WFH becoming a new normal, should we convert more commercial office spaces into mixed-use developments? and Rejuvenating the Core Central Region: URA’s Master Plans for Orchard and Novena.