Looking to live near Singapore’s second CBD in Jurong? You might want to look out for the May 2022 BTO launch in Jurong West, where an estimated 1,010 units will be up for grabs.

HDB hasn’t released the price range yet. So for now, you can refer to SRX’s estimations based on nearby resale transactions and launch prices from recent BTO launches.

Source: SRX. These estimations take into account property age and location. If a launch is nearer to an MRT or commercial development, it’s likely to be more expensive.

Based on these pricing forecasts, we can estimate the downpayment, monthly instalments and household income needed to pay for the May 2022 Jurong West BTO flat. These estimates are based on the following assumptions:

What we noticed about the May 2022 Jurong West BTO

The first thing we noticed about this Jurong West BTO is that it’s right next to Jurong Lake Gardens. So this project is perfect for nature lovers, as the flats will overlook the lake.

This also means that the BTO is very close to Jurong Lake District, which is set to be Singapore’s second CBD.

What’s more, this Jurong West BTO will offer the second-highest number of units (after the Henderson Road BTO in Bukit Merah) in this May 2022 launch. So here’s where you can consider balloting to increase your chances of securing a BTO ballot number.

Jurong West may sound ulu. But the good news is that, like most of the BTO projects in the upcoming launch, this Jurong West BTO is within walking distance to the MRT. More specifically, it’s within a 10-minute walk to Lakeside MRT.

So you’ll be just one stop away from Boon Lay MRT, which will be an interchange for the Jurong Region Line (JRL). Here’s where you can switch to another line to get to other parts of Jurong besides relying on the bus. The line is slated to open from 2027 onwards, which should be around the same time this BTO will be completed.

Or if you’re going to the northern part of Singapore, Jurong East MRT is just two stops away, where you can switch to the North-South Line.

We also like that there are several malls in the area, so you don’t have to go to the city centre for your retail needs anymore. Ride one stop to the west, and you can find Jurong Point next to Boon Lay MRT. Ride two stops to the east, and you can find JEM, Westgate, JCube and IMM next to Jurong East MRT.

This May 2022 Jurong West BTO is also pretty ideal for those with kids, as there are several childcare centres within less than 10 minutes walking distance that you can choose from.

These include My First Skool, My World Preschool and PCF Sparkletots which are all along Kang Ching Road, Little Footprints Preschool at Corporation Drive, Jurong Christian Church Kindergarten at Tah Ching and My First Skool at Yung An Road.

Your kids won’t have to travel far to go to school too (at least until secondary school). This BTO is within a 10-minute walk to two schools, with Yuan Ching Secondary located just next to the BTO plot and Lakeside Primary around a six-minute walk away.

Besides Lakeside Primary, there are a few other primary schools within a 1km radius, including Rulang Primary and Shuqun Primary. So you don’t have to worry too much about not being able to secure a spot for your kid.

There’s also Canadian International School within a 20-minute bus ride from the BTO.

If you’ve always wanted to live close to nature, this might just be the BTO for you. With Jurong Lake Gardens just across the street, you can go for a stroll there as and when you feel like it.

There’s more that you can do at the park too. One of its latest additions is a therapeutic garden designed to cater to children and seniors with special needs.

On top of that, you can find water sports activities such as canoeing and kayaking, where you can paddle around while taking in those scenic views.

A little further is Jurong East Sports Centre at around a 20-minute bus ride. And it’s not just the typical sports centre with facilities like a stadium and a swimming pool. Here’s where you can find a wave pool and slides too.

As if that’s not enough, you can expect more sports facilities in the area with the upcoming ActiveSG Sport Village @ Jurong Town at the former site of Jurong Stadium. So it will be around a 15-minute bus ride. But for now, we don’t know any other details about it (not even what kind of facilities will be there).

A bonus is that we can expect a new tourist attraction next to Chinese Garden MRT in 2027. We don’t think it will be a Disneyland though, but we hope it’s another theme park (yes, USS isn’t enough).

The nearest polyclinic from the BTO will be Jurong Polyclinic, which will move 150m from its current location to the former site of a student hostel called yo:HA @ Jurong in 2025.

It will take around a 20-minute bus ride from the BTO site to get there.

And if you need more comprehensive medical services (or in case of emergencies), Ng Teng Fong General Hospital will be around a 10 minute-drive away.

Since Jurong West is considered a non-mature estate, the 2-room Flexi flats here will be available for singles to apply (yay!).

On top of that, this Jurong West BTO is one of the two projects in this May 2022 launch that will offer 5-room flats. The other project is the Yishun BTO.

So here’s also where it’s more suitable for bigger families, or those that just want to have more space.

Far from the city centre

Among the projects in the May 2022 BTO launch, this Jurong West BTO is the furthest from the city centre. While there’s a direct train to get to the CBD, it takes around 11 to 12 stops to get there.

Plus, Jurong West sits at the western edge of Singapore, so travelling time to get to other parts of the island will be longer.

May 2022 Jurong West BTO: Where are the best stacks with the best views?

HDB hasn’t released the site plan yet, so we don’t know where the stacks will be located.

For now, we’re just going to look at the surrounding areas to figure out where you may be able to get the best views.

As mentioned earlier, what stands out to us is that the BTO is right next to Jurong Lake Gardens. On the other hand, apart from the east side of the plot, it’s mostly surrounded by residential developments.

So at this point, we think the best views would be from the east-facing stacks overlooking Jurong Lake Gardens. Look out for the stacks here to get unblocked views of the lake and greenery. 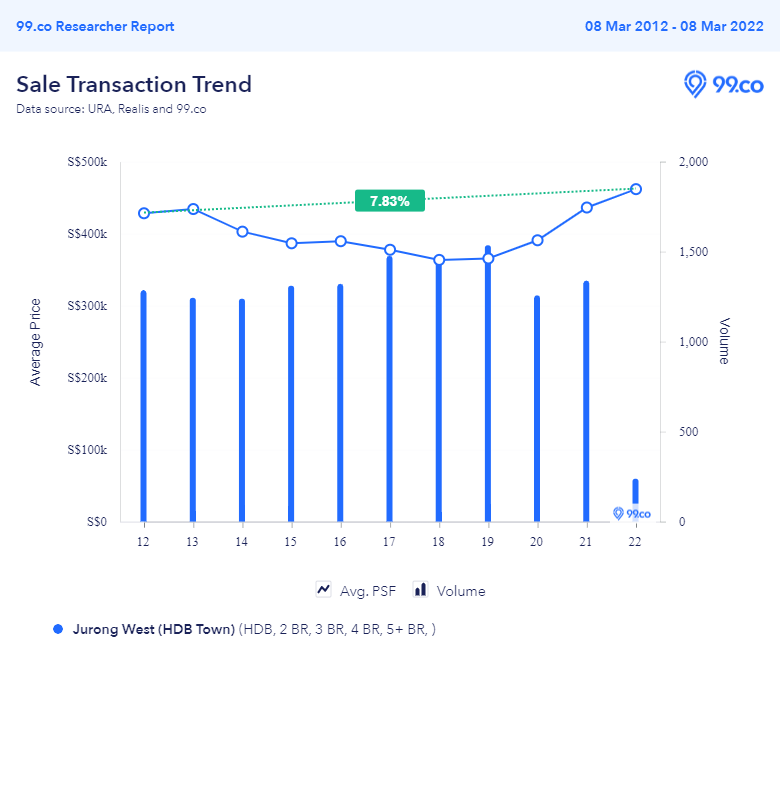 Looking closer at the BTO flats in the estate, we found that so far, four BTO projects have entered the resale market. The first one is Boon Lay Meadow, which has seen a price increase of 12.66% since entering the open market in 2017. 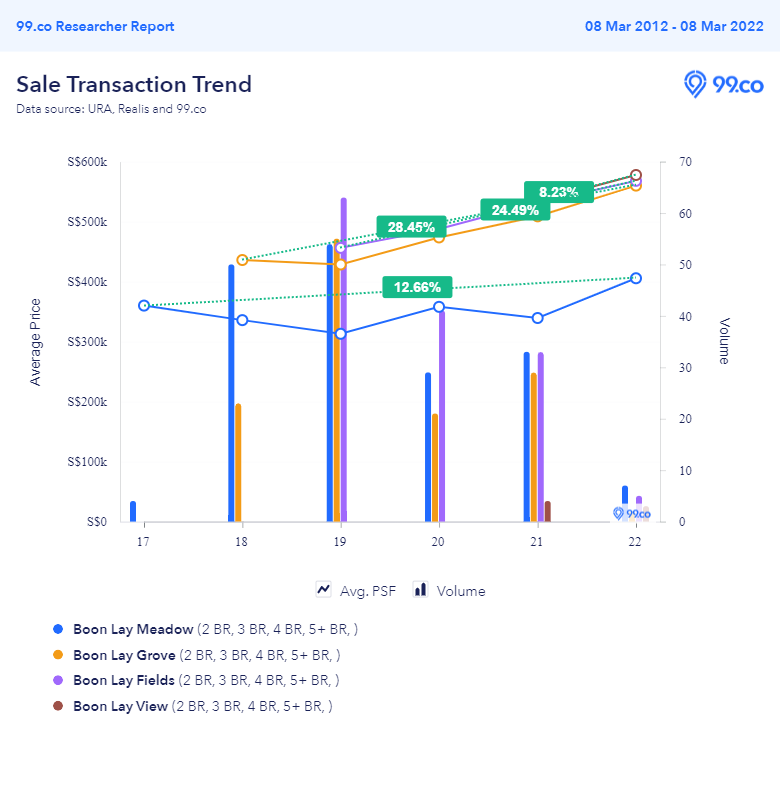 Given the BTO’s proximity to major developments such as Jurong Lake District, Jurong Innovation District and improved accessibility in the area with the Jurong Region Line, we can expect an increase in property value here. This includes a high capital appreciation for the Jurong West BTO flats in future.

When fully developed, both hubs will bring about thousands of jobs to the area (around 100,000 jobs for Jurong Lake District, and around 95,000 for Jurong Innovation District). So besides an increase in property value, there are some rental opportunities here in the years to come.

Yes, if you’ve always wanted to live next to the greenery, you might want to consider balloting here.

Despite its proximity to the Jurong Lake District, we still think this Jurong West BTO will be one of the less popular projects in this upcoming May 2022 launch. After all, we’re talking about a launch that also features extremely popular estates such as Bukit Merah and Queenstown.

So if you really, really want to get a queue number, you’ll have a higher chance of scoring one with this BTO.

Will you apply for the May 2022 Jurong West BTO? Let us know in the comments section below or on our Facebook post.

If you found this article helpful, check out our overview of the May 2022 BTO projects and in-depth reviews:

How often does HDB launch BTO?

HDB launches BTO projects every quarter, in February, May, August and November.

Can you buy BTO twice?

The short answer is yes, but take note that you can only buy a subsidised flat twice.

How often is the Sale of Balance Flats (SBF)?

The Sale of Balance Flats (SBF) is launched every 6 months, in May and November. 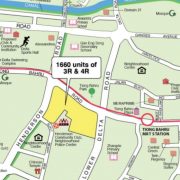 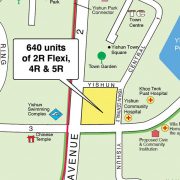 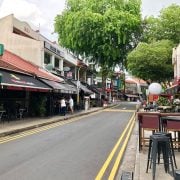 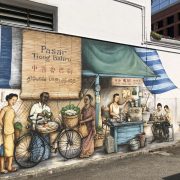