2021 has been an interesting year. Mask-wearing, SafeEntry and the changes in phases (we’ve lost count of how many times we’ve entered a new phase) remind us the pandemic hasn’t ended yet.

At the same time, looking at the robust property market this year, it doesn’t feel like we’re in a pandemic anymore. Given the positive economic outlook, we’ve seen several condo projects slated for last year being launched this year. Some of these new launch condo projects have even made headlines and chalked up record deals.

With the year ending soon, we thought it’s apt to look back and recap on the new condo projects launched in 2021, including those launching this month.

A breakdown of the 2021 new launch condos 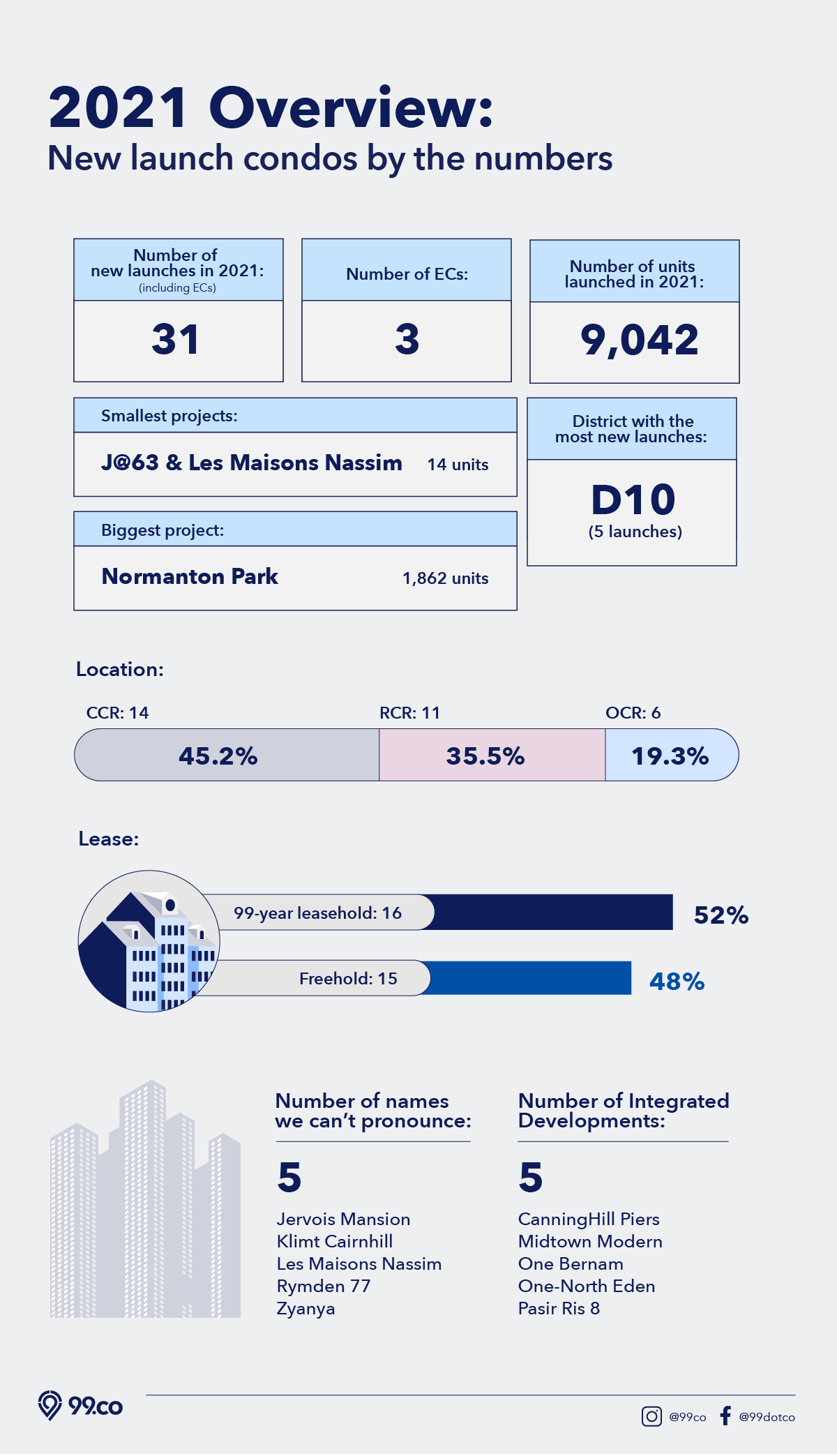 A number of them were previously slated for launch last year (and featured in our 2020 new launch condo list). But their launches were pushed back to this year due to the pandemic. This includes Midtown Modern, Klimt Cairnhill and Perfect Ten.

Around half of the new launch condo projects (15) are from en bloc sales, with 10 from the 2017 – 2018 en bloc fever. The remaining projects are mostly from the government land sales (GLS) programme (11).

Tenure wise, slightly more than half come with a 99-year tenure.

Similar to 2020, we’re also seeing mainly small to medium projects being launched this year. The only large project launched in 2021 is Normanton Park, which had its developer hit with a no-sale license back in January 2019.

Another notable aspect we noticed this year is the number of integrated developments launched. This is despite the fact that work-from-home and online shopping are not going away as we move towards post-pandemic recovery.

On the other hand, there’s some anticipation that people will eventually return to the office. And things are looking optimistic for the physical retail front, and people are heading back to the malls.

Despite construction delays due to manpower and supply shortages, we’ve seen high demand for these new launch condos for the past year. This is likely due to the recovering economy and low interest rates. More are also buying now as they expect prices to increase in future, especially as the supply of new condo units is declining.

In fact, we’ve seen strong sales since the start of the year. For instance, Normanton Park, the first launch of the year back in January, saw around one-third of its units sold on the first day of sales. Another strong launch was for One-North Eden, which sold 85% of its units over the launch weekend.

One noteworthy project in the CCR is Jervois Mansion. The developer had sold 104 out of the 105 units put up for sale during the launch weekend in October.

There’s also CanningHill Piers, which became the best selling launch in the Central area this year after selling 77% of its units during the launch weekend in November.

Over in the OCR, there’s the launch of Pasir Ris 8 back in July. Despite six rounds of price reviews, it saw 85% of its units sold over the launch weekend.

For instance, back in May, a Park Nova penthouse set a record for the highest price psf in the Orchard Boulevard area when it was sold for S$5,838 psf.

Around six months later, we saw a Les Maisons Nassim penthouse sold for S$75m or S$6,210 psf, making it possibly the most expensive penthouse sold in recent years.

What we expect to see for 2022 new launch condos

Barring any cooling measures, we expect prices to continue increasing at a healthy pace as supply declines. As of Q3 2021, 17,410 new condo units remain unsold. Additionally, most of the 2017 – 2018 en bloc cycle projects have already been launched in these two years. So there will be fewer new launches in 2022.

(Check out the list of new launch condos potentially launching in 2022 here!)

Another factor driving up prices is the higher land cost. Due to developers’ dwindling land bank, we’ve seen stronger demand for land bids, as shown by the prices paid for the GLS plots this year. For instance, the Lentor Central site was sold for S$784.1 million, translating to S$1,204 psf per plot ratio. Expected to be launched next year, the units could potentially be sold for around $2,000 psf.

The increasing construction costs from the manpower crunch and supply chain disruptions will continue to raise prices as well.

At the same time, we don’t think there will be any cooling measures anytime soon.

In general, prices have been growing at a pretty healthy rate. According to URA, the price index of non-landed private properties was 157.1 in Q1, before increasing to 159.9 in Q3. This translates to a percentage change of 1.8%.

Likewise, interest rates have started increasing. Coupled with current measures that prevent overleveraging, such as the 75% loan-to-value ratio, 60% Total Debt Servicing Ratio (TDSR) and stamp duties, demand will probably be at a healthy level.

Still, if you’re looking to buy a new launch condo in 2022, it pays to be prepared, in case of any cooling measure announcement.